Coffee - so much more than just a drink - more a way of life. The director David Lynch is famously quoted as saying that “even a bad cup of coffee is better than no coffee at all”. While the amount that is either good or bad for your health is still unresolved, coffee remains the most popular beverage in the world with more than 400 billion cups consumed each year. More important than the sun rising in the sky, once the taste and kick are floating around in your blood system, it seems that the day is ready to start. Senior lecturer in Food & Beverage Management, EHL's Alain Berruex takes us through some lesser known coffee facts and explains the love story between EHL and this luxuriant beverage.

The first coffee trees were found in Ethiopia on a high plateau in Kaffa province, close to the Great Rift Valley. Legend says that coffee was discovered by Kaldi, a young shepherd, who saw his goats eating the berries and noticed them getting very lively. So he tried it, felt stimulated and revitalized, and brought his discovery to some Sufi monks living in Ethiopia. Originally from Yemen, the monks took the berries, trees and habit of drinking coffee back to their country.

The port of Al-Makha (Mocha) in Yemen is essential to the spread of coffee. Beans were imported from Ethiopia and then sent to the Red Sea to sacred Muslim cities, such as Mecca, Medina and Jeddah. Thanks to the pilgrims visiting those cities and returning home, coffee quickly spread to all the Arab countries and become a daily drink for Muslims. Coffee helped them stay awake and focused during night prayers. They gave the name ‘Arabica’ to the bean.

At that time, merchants would walk the city streets with pushcarts and sell coffee to passersby. People used to stop, have a coffee and start chatting. This created the convivial, social link between people and the ritual of drinking coffee. Then coffee became so important that the first coffee houses opened simultaneously in two very important cities, Damascus and Aleppo, in present-day Syria. Gradually, coffee spread to other great cities, such as Istanbul, Cairo, Beirut and so on.

The first Europeans to trade coffee with the Arabs were the famous Venetian traders. They imported coffee drinking and spread it throughout Italy and Europe. The first European coffee house opened in Venice between 1645 and 1683. When coffee arrived in Europe, it was considered a luxurious, expensive and rare product. The Dutch were the first Europeans to grow coffee. They started in Sri Lanka, bringing coffee trees to Indonesia on Java Island.

The French, who also got their hands on a few coffee trees, started to grow coffee in Martinique. Then the French Governor offered a plant to the British Governor of Jamaica. Jamaica started to produce the famous Blue Mountain Grand Cru and, subsequently, the British participated in the spread of coffee around the world.

Up to 124 species of the Coffea plant are known, but not all of them are edible. Only a few of them are grown to produce coffee, specifically ‘Coffea arabica’ that gives us the sweeter tasting Arabica bean and ‘Coffea canephora’ that produces the stronger, higher caffeined Robusta bean.

Arabica is much more delicate than Robusta. Delicate first in terms of growing: the tree cannot be exposed to too much sun, it has to grow in high altitudes and needs rich soil, such as old volcanic soils. We can feel it in the taste, Arabica beans have aromatic, fruity and delicate notes, and make up for between 60-80% of the world’s coffee production.

Conversely, Robusta trees are cheaper and easier to grow. They have deeper roots in order to get their nutrients and don’t need high altitudes, just a lot of sun. In terms of taste, Robusta has earthy, strong and slightly bitter notes. Most of the time, the two beans are blended so to achieve the right balance between the delicacy of Arabica and the strength of Robusta, with a respective ratio of 80/20 being the most popular.

The fruit of the coffee tree is called a cherry. When ripe, it is opened and two beans are found in it. The beans are wet, sticky and soft. They need to be cleaned, washed and dried. After this process they are called green beans, or green coffee. This is how the beans are sold on the market, because it is easier to preserve them. Finally, the beans need to be roasted to arrive at the beautiful brown/black color we all know, and to develop their aromas. Studies have shown that a green coffee bean contains approximately 200 aromatic molecules. The same bean can show up to 800 aromatic molecules after roasting! 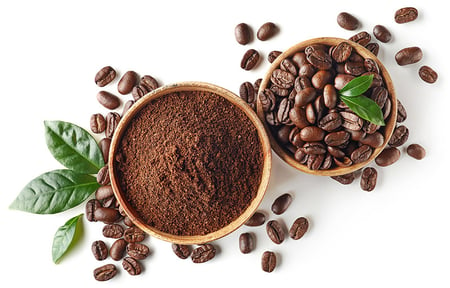 Also known as ‘decoction’ (or ‘cowboy coffee’ because it’s so easy to make). Ground coffee is placed in cold water and is slowly brought to a boil. Then you can either filter it or let the grounds settle at the bottom. Popular in countries like India, Vietnam, Turkey and Cuba, where exotic extras are often added (e.g. very sweet condensed milk or charcoal for an extra smokey flavor). The best tip here is not to over boil the water, keeping it around 90 degrees will avoid any bitterness in the taste, and do not stir the sediments at the bottom. 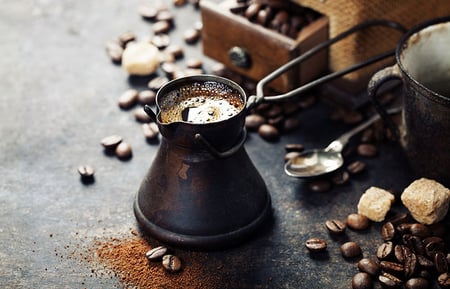 Often associated with the French Press coffee maker. This is the coffee experts’ favored method because all the aromatic molecules are given time to open up and expand smoothly and naturally at their own pace. Like tea, water is heated - (as usual, just below boiling is best) – then added to the coffee and left to brew for 2 to 5 minutes. After stirring, the famous ‘pressing down’ then occurs which serves to remove the coffee grounds and tiny particles. The press also serves to squeeze out all the flavor and character from the coffee, ensuring all essential oils and antioxidants are evenly diffused.

Often associated with the 3 piece Moka pot, (also known as the ‘stovetop espresso’), and the typical espresso machine we see in Italian bars. With the Moka pot, water heats in the bottom section creating steam that rises and, under pressure, shoots up the funnel to the middle section which holds the coffee grounds. This makes the coffee wet and starts to release its aromas. After a few seconds the brewed concoction is then sucked up into the top section from which the coffee is poured. Unlike the French Press, here it’s best to use slightly coarser coffee grounds. The espresso machine applies much more pressure to the process thanks to its motor-driven apparatus which is responsible for the light, frothy ‘crema’ around the perimeter of your cup of coffee. 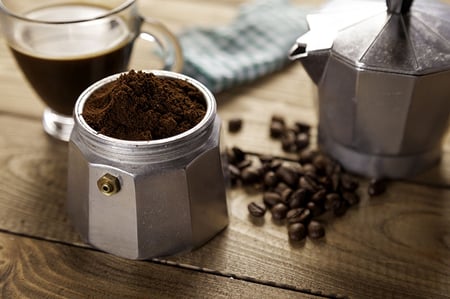 Purists argue that ground coffee is something that should never be stored, it should be consumed ASAP once the beans have been freshly roasted and ground. However, back in the real world: air, moisture, heat and light are the things to be avoided when it comes to storage.

It’s best to keep coffee in an opaque, airtight container at room temperature. Surprisingly, the fridge is not the best place for coffee in any form, ground or whole bean, even when sealed. It is simply not cold enough to keep your coffee really fresh, (it’s better off in the freezer), and because coffee works as a deodorizer, it will absorb all the aromas in your fridge- which will definitely have a negative impact on your morning cup!

It is recommended not to keep roasted coffee beans for more than one month. It is better to regularly buy freshly roasted coffee in small amounts and do your grinding at home just before brewing. This way, your coffee will taste better and you will be more tempted to try out new varieties.

There are many reasons that explain the fact that EHL staff and students are BIG coffee lovers. Some might argue that everyone on campus is purpose-driven with busy daily agendas that require much va-va-voum in terms of focus and energy. Others might say that it's the EHL emphasis on human interaction - part of its DNA - that fuels the need to meet over regular convivial cups of coffee, e.g., hatching plans over an espresso helps to oil the wheels of business exchanges and partnerships. It's worth noting that EHL campus Lausanne starts early and closes late - it is quite simply a place where things happen!

Here are some stimulating coffee facts that help to understand the depth of the love affair between EHL campus Lausanne and this special beverage:

Just remember that a real coffee maker is no more than a crazy scientist! - Alain Berruex.

From EHL dress code to dress for: insights to professional appearance