How should we measure the tourist experience? Material well-being, or GDP, is regarded by some as insufficient to measure our quality of life and the evaluation of specific services in terms of customer satisfaction may also be somewhat lacking.

For various industries that cater to tourists and practise the essence of hospitality through nurturing host-guest relationships, tourist happiness may be a better measure of service performance and destination competitiveness as it takes into account not just lobbies and facilities or services provided, but also factors in the whole tourist experience.

What are then the factors that can make tourists either happier or less so, while traveling in and around Switzerland?

Switzerland has been consistently ranked among the world’s happiest countries since 2012, when the first World Happiness Report was published. It’s probably also one of the happiest tourist destinations, according to a study by EHL assistant professor Yong Chen and his co-author, Dr Robert Li Xiang, from Temple University in the United States.

The study has developed a happiness index that measures how happy tourists felt during, or right after, their most recent trip in Switzerland in 2015. For Chen, the tourist happiness index aims to analyze tourists’ long-term subjective well-being and short-term emotions generated from their travel experiences at a destination.

The tourist happiness index takes into account four dimensions of happiness: life satisfaction, positive affect, negative affect, and eudaimonia - which the Organization for Economic Cooperation and Development defines as ‘meaningfulness’ or ‘purpose of life’, although it is often translated from the ancient Greek as ‘happiness’ (OECD, 2013). The study surveyed some 1,450 tourists, including Swiss domestic tourists and inbound tourists from eight markets.

“The degree to which tourists are happy with regard to Switzerland varies according to where they are from,” says Chen.

While China itself lags far behind in the world’s happiest countries rankings, Chinese tourists do not seem to be bothered by their relatively low level of happiness at home. As for other interesting results, the British were the least happy among the eight markets and, oddly enough, the Swiss do not seem as happy when they are on holiday within their own country. “Despite some exceptions, travel – especially long-haul and international travel – may make tourists happier,” the study concludes.

Among the many factors examined, the study looked at whether tourists’ behavioral patterns – ranging from when they traveled to Switzerland to how long they stayed – can affect their happiness at the destination.

The good news for the Swiss hospitality sector is that tourist happiness increases with the length of stay in the country.

Tourists who stayed for more than eight nights reported they were substantially happier than those who stayed fewer than four nights. Length of stay not only suggests that tourists have more time to experience a destination, it also indicates that tourists may be more engaged in travel activities at the destination, which in turn help enrich their experiences and boost happiness as well. While it is difficult to say whether being happy leads to longer stays or that, conversely, longer stays lead to greater happiness, this could have profound implications for the industry as it tries to ensure tourists come back again and again.

The study also found that tourist happiness is linked to seasonality.

Although recreational activities such as skiing are regarded as a major draw, tourists visiting Switzerland between January and July were reportedly the least happy. 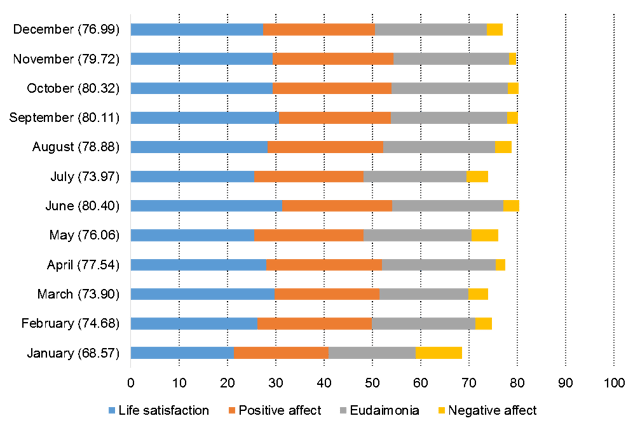 While no consistent pattern was discernable in tourist happiness levels based on the frequency of visits to Switzerland, first-time visitors were the least happy (71.66). Tourists who visited Switzerland between five and seven times also reported relatively lower happiness levels (73.88), while those who visited Switzerland between eight and ten times reported the highest levels of happiness (80.15). This complex relationship between happiness and travel frequency suggests different market segments were involved. For example, business travelers may travel more frequently than tourists, but they may not be as happy as those traveling for leisure. Also, domestic travelers are no happier than long-haul or international tourists.

Business travel generally makes people less happy as it involves work commitments rather than pleasure. While business travel normally involves some leisure activities at the destination, pleasure is a secondary consideration. Leisure travelers were the happiest, scoring 79.44, more than 10 points higher than business travelers (68.59). Those visiting friends and relatives (VFR) came in at 76.71.

There was no substantial difference in the happiness levels of tourists who traveled alone, those traveling with friends and/or colleagues, and those who traveled with family. The study found that tourist happiness varies according to the type of tourist activity.

Tourists who engaged in sports while traveling were the happiest with a score of 80.84, while those engaged in nightlife activities were the least happy (69.38). This finding indicates that highly-engaged tourist activities can bring about happiness as these activities can generate experiences, which are seen as a crucial component of happiness, as opposed to focusing on material goods. This means that destinations should look to diversify their range of activities to attract different types of tourists, while figuring out which particular travel activities would bring about greater levels of happiness.

The biggest disparity in happiness levels was between those who were willing to visit Switzerland in the future and those who were not. Tourists willing to visit Switzerland reported a higher level of happiness at 81.24, nearly 20 points higher than those who were not. Tourists who are reportedly happier at a particular destination are clearly more likely to visit the destination in the future. Therefore, happiness can be an important indicator in terms of how a destination performs. That involves a wide range of service sectors but also the image of the destination perceived by tourists. Since happiness, particularly related to life satisfaction and eudaimonia, stays in our minds for a long time compared to customer satisfaction and service quality, it can have a profound effect on tourist behavior and destination choice.

As for segmentation by age, ‘millennials’ (25-34 year olds) who were surveyed were the happiest of all the age groups. With the exception of the youngest group surveyed (15-24 years of age), tourists tended to be less happy the older they were. The diminishing levels of happiness, on the one hand, corresponded to gradual declines in the scores on all three positive dimensions of happiness – namely life satisfaction, positive affect, and Eudaimonia. They were, on the other hand, accompanied by a gradual increase in negative affect.

Tourists with secondary education, the lowest level attained in the survey, were among the least happy, while those who had obtained postgraduate degrees were among the happiest. Employment is also an important factor behind tourist happiness. Those with jobs reported happiness levels some 10 points higher than those in all other categories (retired, student, and other), making them the happiest tourists. Studies from various disciplines have showed that employment helps improve our economic situation, which in turn has much to do with our happiness. When it comes to consumption, the employed clearly have greater purchasing power, which allows them to afford a wide range of tourism products and services at the destination, thereby increasing their happiness. Being employed also means experiencing less stress and experiencing fewer negative emotions while traveling, all of which contribute to higher levels of happiness.

Not surprisingly, the study found that income was positively associated with tourist happiness.

Income is the most visible indicator of social status, as it is related to education, occupation, and employment status. The finding that Chinese tourists reported the highest happiness levels might be because those who traveled in Switzerland were relatively wealthy.

With GDP, a measure of material well-being, now seen as insufficient in measuring quality of life, economists have been considering an alternative measure of a nation’s economic prosperity and social progress that includes subjective well-being, or happiness.

As policies at the national level shift to measuring economic prosperity and social progress, the hospitality industry should consider whether service quality and tourist satisfaction, two ubiquitous indicators of service and destination performance, are still reliable when travel and leisure become an indispensable part of our daily life.

Tourist happiness may not only be a better measure of service performance and destination competitiveness in terms of assessing holistically the tourist experience. It can also be a tool that, if used agilely, can boost ‘life satisfaction’ for tourists as well as for the general population. Above all, what gets measured gets managed.