Setting the Bar: Navigating the Second Golden Age of Drinking

“The first Golden Age of drinking is widely regarded as the 1830s to Prohibition in the United States. It was the dawn of the modern era of drinking. There’s a reason we still drink martinis, Manhattans, and the Old-Fashioned, which was the first cocktail in 1806.” In the midst of a global pandemic, relaxing at a bar with your co-workers on a Friday evening, with a cocktail in hand may now seem like a distant memory. But the beverage sector has successfully navigated through its transitions from the highs of its first Golden Age, to the lows of the Dark Age (the World Wars and the Great Depression), to the current second Golden Age – and there is no reason to believe that this time will be any different.

Globally, the alcoholic drinks market is expected to reach USD$1.37 trillion in revenue in 2020. With world-class bars becoming increasingly popular and the competition only getting stiffer, the drinking scene has been at an all-time high. In this ‘second Golden Age’, Paul Gabie, CEO and Co-Founder of Proof & Company, dished up the stories in a webinar with EHL on how the company has fashioned some of Asia’s top bars, presenting their concepts which are an intoxicating mix of fun, imaginative, and truly experiential.

How some of Asia’s best bars were conceptualized?

The bar scene as we know it today is relatively young – over half of the bars on the list of Asia’s Best Bars have barely been around for 5 years. Yet, concocting a world-class bar concept takes more than just incredible bartenders and a ton of passion and commitment. The renowned ATLAS bar in Singapore has become a quintessential name in the sector, famous for its Art Deco grandeur and finest selections of gin – and the seamless, breathtaking experience it offers makes the concept appear almost effortless. But as Paul explains, ATLAS is the result of a distinctive blend of having a clear vision from its owners, in a dramatic, one-of-a-kind space – along with 2000 to 4000 man-hours of patience and dedication, just from the concept development perspective.

This means that each opportunity is unique, and neither is any one project as capital or time intensive as another. The Pontiac, one of Hong Kong’s most famous craft cocktail dive bars, has been listed on Asia’s 50 Best Bars since its inception in 2016. Owned by EHL alumnus Harsh Roopchand and headed by bartender Beckaly Franks, Pontiac has been a force of genuine character in the industry and a voice of inclusiveness, being at the center of the LGBTQIA+ community and having a female-led team for years. Yet, it took a mere 60 days, a relatively small amount of capital, and a lot of personality to develop, renovate, and re-conceptualize this now-iconic bar.”

Each concept is thus a careful amalgamation of what the Proof & Company team calls the ’20 Pillars’, which refer to 20 individual layers that collectively shape the guest experience; the team, food, interior design – each is its own layer. “The Layout, we don’t often think about as a separate layer from design and decor, but it is. You know, how the space flows really shapes how humans experience space and how they react to it, so layout is its own layer,” Paul emphasized. Even Location is a pillar on its own that influences the type of guests you receive and peoples' perception of the venue, as he shared the story of a bar called the Vagabond in Singapore which, despite a strong concept and beautiful interior design, faces challenges attracting guests due to its location.

The Design of ATLAS; the Team at Pontiac; above all, Concept is the first pillar that defines the rest of the layers down to the smallest of details, including the type of glassware at the bar. While ATLAS serves a martini in a bespoke Waterford Crystal – an expensive and beautiful heavy glass, the Pontiac serves up martinis in an unpretentious down glass – with no stem and a bit of attitude; reflective of their respective styles. In other words, each detail must have been woven through what Paul calls the ‘golden thread of concept’, and it is only through considering the 20 pillars holistically, that success may be underscored amongst an increasingly discerning clientele.

Staying relevant in the current times

With the ever-changing nature of consumer preferences, savvy businesses have long learned not to rest on their laurels when it comes to success. 28 Hongkong Street is known as one of the first American craft cocktail bars in Singapore, having opened back in 2011. While the fundamental principles of commitment to hospitality, quality ingredients, and craftsmanship – which have been the hallmarks of the second Golden Age – are how 28 has remained relevant as a concept through the years, its team and customers have gone through generations of chapters that have continually renewed and refreshed the bar to where it has stood at each stage of its lifecycle. Therefore, while such stakeholder evolution is a natural part of a growing business, the key is in being able to anticipate and manage this change, whilst remaining true to the fundamentals.

Proof & Company clearly is no stranger to this need for deliberate and constant agility in thought, as Paul describes how every 3-4 years, the company makes it a point to carefully reflect on the forces that they believe will shape the next 5 years of the drinks' industry. In 2016, they identified that Sustainability would be a game-changer for the sector. Fast-forward to 2020, Proof & Company has launched ecoSPIRITS – the world’s first low-carbon, low-waste spirits distribution technology.

33 billion liters of spirits were sold worldwide in 2019. Assuming the standard bottle size of 750ml, this may translate to approximately 44 billion glass bottles in a single year, many of which may not have even lasted 20 minutes at a popular bar. In response, ecoSPIRITS patented the ‘ecoTOTE’, which is a 4.5-liter, fully reusable vessel for transporting spirits. It eliminates packaging waste from the supply chain and reduces the carbon footprint of spirits production and distribution by about 80%. “We’re definitely making strides on single-use plastic, but we believe that one of the next bigger conversations will be about single-use glass and that’s what ecoSPIRITS is all about,” Paul explained. Similarly, second on their list of forces was Regionalization and Localization, urging them to partner with local distilleries on the ecoSPIRITS platform, which has been reinforced by the growing trend towards ‘supporting local’. 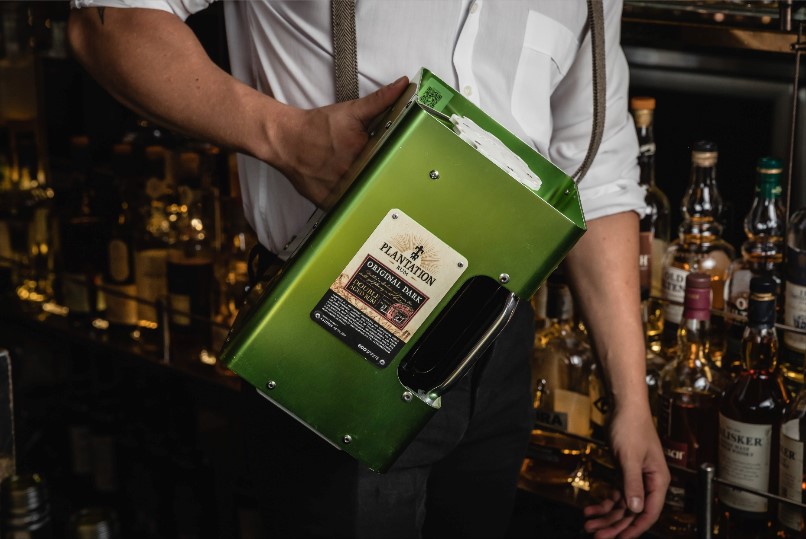 Proof & Company’s implementation of JERRY, a comprehensive learning platform that had been developed internally to increase cross-collaboration and learning efficiency, has been yet another demonstration of the company’s forward-thinking views, as it invests in technology not because it needs to – but because it wants to. Rather than engaging in reactive change, Proof & Company has been seeking out opportunities for proactive change. This has also allowed them to use their capabilities for a good cause, as they opened the platform free-of-charge for individual learners on furlough or unpaid leave due to COVID-19. They amassed 2,000 learners within a month to undergo a full beverage certification training – a scale which could only have been possible through effective technology use.

Many would agree that the concept of ecoSPIRITS is a next big step for the bar and restaurant industry, as more establishments join the movement to remove straws from their inventory – although the real impact of such initiatives on a standalone basis may be contentious. Demand for environmentally sustainable practices has never been higher, and Proof & Company’s timely ability to roll out these initiatives along with these major trends, is a result of deliberate planning that has given them the time to take on these changes substantively and establish concrete solutions, rather than waiting to jump on the bandwagon of new trends. Their success in staying a step ahead is a testament to the importance of anticipating and understanding – from an early stage – the external forces that will, or at least may shape the industry, and acting on them swiftly and precisely.

Optimism for bars in a post-COVID world

Amid continued social distancing measures and no clear end to the pandemic, many bars have had to innovate for survival; turning to cocktail deliveries, DIY cocktail kits, and even creating virtual bars. The short-term prospects of hospitality and the bar scene may thus seem to be on the rocks, especially as many of us in the industry continue to wonder: ‘will we ever recover?’.

However, promising results signaling strong pent-up demand in countries such as China and New Zealand, which have eased measures, have been showing signs of positivity. Proof & Company reported revenues in China equal to their H2 2019 numbers in June, while their New Zealand operations recorded their best month in history in June. Therefore, while the question of when may remain uncertain, the straight answer is that given humans’ innate desire to connect, socialize, and experience, we most certainly will recover from this crisis – garnished with a small wedge of lemon and a dash of optimism for the future.

Sustainability in Tourism: The socio-cultural lens