EHL Passugg offers a variety of diplomas in hospitality excellence. Its curriculum has the specific objective to raise students’ awareness on sustainable trends such as insect food, local produce and vegan cooking. In conjunction with UN Sustainability Gastronomy Day, Gion Fetz (lecturer and former executive chef at EHL Passugg) shares his top local food producers from the bountiful Graubünden region.

The best-known organic potato producer in Switzerland from the Albula Valley, with between 40 -50 rare varieties. Marcel Heinrich only supplies the best chefs in the country. We've become friends!

Martinis Marcel Heinrich’s good friend and counterpart regarding organic cheese and dairy products. The milk is silage-free and everything is processed in the dairy.

Specialised in organic Grison cured meat products and on the committee of the “Semaine du Goût” association. From wild boar to water buffalo, their meats are traditionally dried according to old family recipes in the fresh mountain Graubünden air without pickling salt (nitrite-free). 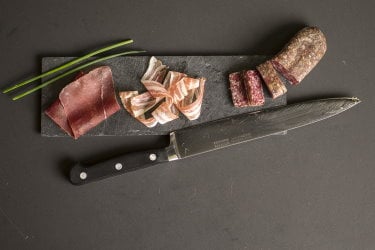 The finest Bündner meats, hams and sausages. A small abattoir committed to organic farming and working closely with the Grisons Farmers' Association and the Plantahof Agricultural School.

First salmon farmer in Switzerland to breakthrough into the producer business. An indoor farm in the Italian part of Graubünden that uses cutting edge aquaculture technology for clean and sustainable fish farming.

Gion Fetz: "After many years as executive chef in 5 star hotels at home and abroad, I came to EHL Passugg in 2014 where I now run the Culinary Arts major. I have been committed to sustainability and local produce for a long time, helped by the fact that the canton of Grison has the most organic producers in Switzerland. For me, sustainability is the only way to preserve the planet’s resources and human nutrition".