Choose right for your type: pasta shapes and their sauce

"There is a pasta shape and recipe for each day of the year and more! In Italy there are over 600 different pasta shapes on the market and new inventions every day, so there is always something new to discover and taste. Italians feel strongly about certain pasta shapes being paired with certain sauces (something I think is only really understood in Italy).” - Gennaro Contaldo, Italian chef and restauranteur.

Unless family fate has blessed you with an Italian grandmother, you have every right to be confused about the myriad of pasta shapes, types and variations, and which sauce goes best with which. Not only are there hundreds of different pasta forms, some with just the slightest nano-millimeter’s difference (as in linguine, bavette and trenette), but move from one region or pasta producer to another and your ‘spaghetti alla chitarra’ might suddenly be called ‘tonnarelli’.

As with Italian politics, football and grammar, it’s best not to ask. Just go with it and accept the fact that if Nonna has been making Bolognese (ragù) sauce with tagliatelle for nearly a century, do not attempt to mess with the formula.

Method to the madness

The hundreds of pasta shapes can be roughly whittled down to 2 main categories: long or short. Within those main types come many subcategories: flat, tube, sheet, smooth, ridged, thick, thin and tiny. (Re. fresh vs. dried pasta – this impacts the way it’s made and its cooking time more than anything else). Once you’ve decided what sauce you’d like to make, ask yourself if it would best suit long or short pasta, then fine-tune the options based on whether your sauce is homogenous or contains interesting lumpy features, and lastly figure out if a hollow, ridged or smooth format would better host the sauce.

Upon closer analysis, there is indeed some method to the madness after all. The basic logic being: Every shape of pasta holds the sauce in a different way. An oily, creamy, thin sauce sticks better to long pasta, whereas a short pasta shape like a tube or a shell is more suited to a sauce where the bits of meat or vegetables can nestle within.

As stated above, this is Italy, and there will invariably be exceptions to every rule. If in doubt, just corner the nearest Italian above the age of 60 and ask for directions; they will be happy to help and share their priceless foodie knowledge with you.

Pasta types and their predispositons

Creamy, thin, oil-based sauces that include anything from the basic smooth pesto to the most traditional sugo al pomodoro. Many summer favourites are found here like spaghetti alle vongole (clams/cockles) and other seafood recipes involving crustaceans, molluscs and sardines – especially popular in the southern regions of Italy like Sicily. The traditional pack of spaghetti tends to be a store cupboard staple and is perfect for those quickly thrown-together recipes like the ever-dependable garlic, oil and chilli. 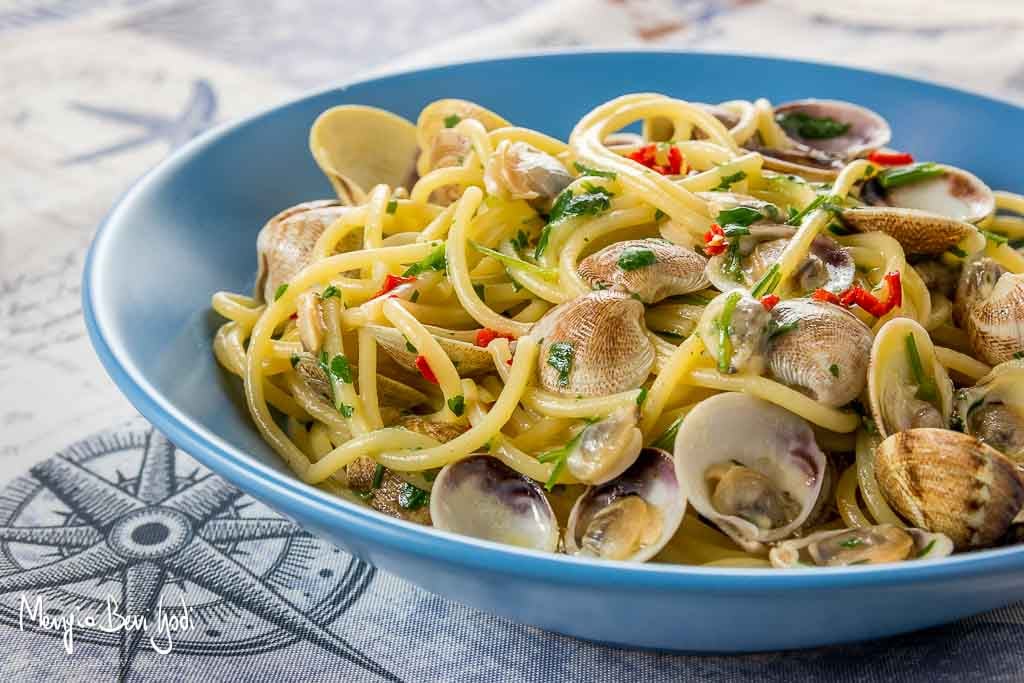 Famously used for the most luxuriant and full-bodied pasta recipes: wild porcini mushrooms in a cream, bacon & hare sauce and the original minced meat ‘ragù commonly known as Bolognese to name but a few. The key here is rich, silky, sensual and very often full-on meaty. The most filling of all pasta dishes, also due to the fact that ribbon pasta is often freshly made and hence contains quite a few eggs.

Generally considered the biggest crowd pleasers of the bunch, these twisted shapes can suit a cold pasta salad as well as anything tomato or cream-based. Recipes include the whole gamut of possibilities: meat, fish, veg and cheese, but generally speaking the sauces are smooth and contain medium-sized chunks of accompanying delights that fit easily onto the fork as you stab into the dish.

Best suited to hearty meat, cheese or vegetable sauces of medium consistency that can snuggle into the tubular shape. Also good for baked pasta recipes (‘pasta al forno’), where their thick shape can withstand being pre-cooked in boiling water and then further cooking in the oven without losing their bite.

Similar to the tube logic, these suit all types of sauces with creamy, cheesey, veggie or meaty ingredients. Here, the juicy nuggets can be minced or chopped into a small, suitable size that can be caught within the shell-like form, be it a piece of tender broccoli or a cube of regional tasty sausage.

The international institution of Italian cuisine that now comes with many variations on the layered sheet theme like salmon, veggie and multi cheeses. Many traditionalists despair at the modernization of certain standard dishes considered untouchable, but certain forms of evolution are beyond anyone’s control, even Nonna’s. My favourite take on the lasagne concept comes from Liguria where a sheet of ultra-thin freshly-made lasagne is laid out flat on a plate and simply slathered with the best pesto from the region. Simplicity at its best!

The easiest category with little ambiguity. Perfect for soups, minstrones and stews, also very popular with toddlers as they transition to solids and younger eaters in general.

“Everything you see I owe to spaghetti” - Sophia Loren.