EHL Hospitality Business School is a leading hospitality university with locations in Switzerland and Singapore. EHL’s Institute of Nutrition Research & Development is conducting a series of interviews with world-renowned chefs to explore the current challenges and future innovations in their field. The fourth in this series of interviews is with French top chef, Jean-Françoise Piège. A successful author of 13 recipe books, Piège is also a culinary celebrity TV figure and one of the most talented and savvy chefs of his generation, with a list of award-winning high-end establishments in France and Taipei to his name. 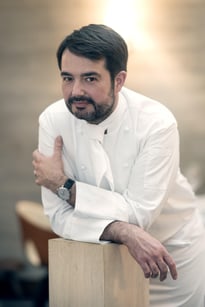 Chef Jean-Françoise Piège is a creative force who breaks down barriers, not only in cuisine, but in the physical space of his restaurants. Piège runs Le Grand Restaurant, a Michelin-starred classic French restaurant in Paris, along with several other restaurants and brasseries with his wife, Elodie.

Opened in 2015 and situated in the heart of the 'Parisian Gold Triangle' (a prestigious enclave in the center of the capital), Le Grand Restaurant is an avant-garde restaurant, an alchemist’s laboratory dedicated to the art of gastronomy where the chef Jean-François Piège confirms his convictions inspired by French gastronomy proud of its values and heritage.

His ingenuity stems not from a well-honed technique, but from challenging constraints and questioning assumptions about what is acceptable in the hospitality industry.

One way Piège questions assumptions is trying different cooking methods, such as slow cooking, what he dubs “le mijoté moderne.”

“Like many other methods of cooking, slow cooking was wrongly abandoned,” he claims. “Either chefs were remiss in passing along the knowledge or they didn’t see the value in it, especially with the rise of 'mise en place', which enables restaurants to prepare meals quickly.”

At Le Grand Restaurant, Piège has introduced le mijoté moderne by slow-cooking chicken in rice. He is also experimenting in doing the same with lobster, which is usually steamed or boiled, but he has yet to find a successful solution. That doesn’t deter the chef, however. “Creation comes from failure or constraint,” he says. “It is the analysis of failure that allows chefs to adjust their processes and have more success.”

At Mimosa, his Mediterranean-inspired restaurant that serves 300 people a day in Paris, he opted to do away with the mise en place entirely. Instead, Mimosa has a wood-fired oven where items like lobster are cooked and infused with a smoky flavor.

Truth and transparency with customers

Another constraint is that the customer and the chef move in two different spheres: the dining room vs. the kitchen. Piège, however, believes that too much segmentation in the hospitality industry has led to a disconnect between the two. Since food preparation usually takes place behind the scenes, customers cannot see for themselves what restaurants claim is taking place in the kitchen.

“I think that today, restaurants need truth and transparency to instil confidence in the consumer,” he explains. “Especially nowadays, when it’s too easy for consumers to share stories via social media about restaurants without verifying the truth.”

At Le Grand Restaurant, customers have the opportunity to eat in the kitchen where their meal is prepared, just as they would do at home, and observe with their own eyes how things are done. This breaks down barriers and allows a real-time exchange of information. Customers can ask questions to the kitchen staff, and the kitchen staff can pass along knowledge or hear feedback firsthand.

If Piège had a magic wand, he would choose a location between the sea and the mountains - a confluence of culture, of time and place - that would give rise to a cuisine of the moment. He believes that the surrounding environment unleashes a chef’s creativity.

Even without the magic wand, however, he has demonstrated that his environment, specifically small spaces, can spur innovation. Le Grand Restaurant, for example, accommodates only 25 customers at a time. Size constraints have required him to rethink everything from how he organizes a kitchen to how big the plates can be.

“I’m a big believer in the DNA of a place. You can’t do everything in one place. The first thing you have to figure out is, ‘What’s being done in this place and what can you do in this place?’ ”

At À l’Épi d’Or, another one of his restaurants that serves 80 customers a day, the kitchen and dishwashing area are only six square meters. Piège bought the space at auction, partly because he loved its history - it was once a bistro where people who had sold wheat at the famed Les Halles marketplace came to feast.

“We don’t have the space to make big plates, so the plates are smaller,” he said. “Ultimately, the size of the plate determines what you put on it.”

Want to know the secrets of hospitality management?