5 paradoxes: Comparing the first and second Covid waves in Switzerland

A detailed analysis of how Switzerland was impacted by the two Covid waves in distinctly differing ways.

Graph 1: Deaths per million comparing the first wave and the second wave 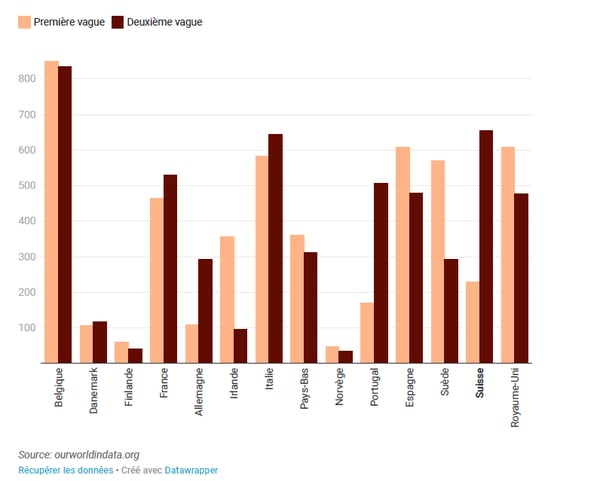 How can we analyze the case of Switzerland ? 5 paradoxes and interpretations:

The delta between the first and the second waves is higher in Switzerland compared to other countries. This is for example visible on the graph below between June and November 2020. Moreover, during the first wave, we observed no clear and significant relationship between the severity of the lockdown measures and the reduction in the number of deaths. With the second wave, this relationship is significant. Indeed, we observed a negative correlation meaning that stricter lockdown measures led to lower death rates (number of deaths per million).

2. Paradox of a good healthcare system

As the quality of healthcare system in Switzerland is high, the saturation was not reached compared to other countries that approached or even reached the level of saturation. When ICUs are overflowing with patients, the government has no other choice than to impose stricter lockdown measures. As this was not the case in Switzerland, the government decided to not intervene too early and even moved to reopen the economy, notwithstanding of course certain constraints due to the situation.

Described in general as one key factor of Switzerland’s success, decentralization was not ideal during the second wave. Indeed, the decisions were much more dispersed and each canton implemented its own measures. This stands in contrast to the first wave, when decisions were imposed by the confederation and the message delivered to the population was much more consistent.

4. Paradox of success during the first wave

Compared to other countries, Switzerland had a very low number of deaths during the first wave (251 deaths per million). This success was due to several reasons such as the speed of government actions, the quality of the healthcare system, personal responsibility of the population to follow the measures, etc. This explains the fact that during the summer of 2020, the government and the general population underestimated the presence of the virus. Indeed, in Switzerland, we reduced our attention during the summer as we were less directly confronted with Covid deaths.

5. Paradox of economic health vs. the health situation

The question is not to oppose the economy versus health as both are correlated. Indeed, the virus’ severity in countries (number of deaths per million) accounts for almost 10% of the decrease in those countries’ GDP growth rate (Le Temps). Regarding the increase in the unemployment rate during 2020, it can be observed that almost everywhere in Europe this rate has increased with a maximum of +2.48 for Spain, where joblessness rose from 13.78% in January 2020 to 16.26% in December 2020 (Tradingeconomics.com). In Switzerland, we went from 2.6% (January 2020) to 3.5% (December 2020).

If the increase has been limited for the time being, it is mainly due to the economy being propped up primarily by government support. Of course, the challenge for the government is to support its economy and its companies during each subsequent wave by enacting consistent policy that will maintain the population’s high level of trust over the course of the coming months.

Graph 3 : Unemployment rate in Switzerland between January and December 2020

In conclusion, the extent and pace of the recovery in Switzerland will depend on the speed and effectiveness of the vaccination campaign. For that to happen, the Swiss decentralization system - with its unique organization and structure - might stand as the country’s best chance to ensure supplies are distributed evenly and the logistics of the rollout are smooth. How will Switzerland fare? The next few months will be telling...