Is wine a work of art and is the winemaker an artist?

Is wine a work of art and if so, does this mean the winemaker is an artist? At first glance, this question might seem incongruous or even futile, but for connoisseurs of wine or art, the question can be relevant and worthy of discussion since both have much in common.

Esthetics is playing an increasing role in how we drink wine and prices are increasing even faster (a bottle of Romanée Conti from 1945 was auctioned off in 2020 for nearly €482,000). These two factors, among others, have made the question perfectly legitimate. Wine is not drunk solely for its intrinsic qualities; buying and drinking wine is also a way of communicating. Wine is purchased for the symbols that it represents (financial, social, cultural) and not just for how it tastes or looks.

It is not surprising that many winemakers increasingly associate wine and art to promote their business. And it’s not just the major wine houses that are jumping on the bandwagon; more and more wineries are injecting esthetics into their marketing strategies, drawing an analogy between their wine and art in various forms. One particularly successful example of this phenomenon is the cooperative at St. Chinian in France.

Wine is NOT a work of art

Let's look at the argument from the opposite side: Wine is not a work of art. The German philosopher, Emmanuel Kant, stated: “esthetic judgments are contemplative and therefore cannot be practical”. For Kant, wine is unequivocally banished from the realm of art. Wine can be appreciated, but it’s something you drink; not something you contemplate. Moreover, although a bottle of wine can potentially be “beautiful” it doesn’t necessarily mean it’s art. An object or even nature can, for example, can be esthetically unique without necessarily being works of art. Art and esthetics are not necessarily synonyms.

The most convincing argument is undoubtedly that wine is a product that can be reproduced and is - at best - a craft. An artwork must absolutely be unique, at least for the visual arts. After all, if the Mona Lisa is so famous it’s because there is only one of her. How can you argue that you’re making a work of art if you’re producing thousands of bottles of it? Originality is one factor separating art from craft.

Furthermore, wine is not exhibited in museums for people to scrutinize. In a work of art there is often a message, which is sometimes quite hidden, but which asks the spectator questions. Artworks are often used to communicate, whether it’s Hieronymus Bosch’s “Last Judgment” or the street art of Banksy. While wine communicates information to our limbic system (the part of our brain governing emotions and memory), it doesn’t ask provoking questions. It doesn’t try to send us an underlying message to reach our subconscious, to take a particular social or political position or even to stimulate reflection.

For all kinds of art, the prevailing trend of the times is often challenged by an emerging movement, which grows out of its opposition to the status quo (e.g., realism vs. romanticism). This automatically creates positive emulation, thus enabling other artists to break certain codes and offer a new vision of their art. Artistic innovation often occurs after an artist has reflected on social, economic, political and religious issues. What revolutions have we seen emerge from the world of wine in recent years?

Notwithstanding the fledgling emergence of organic and biodynamic wines, the revolution seems a little soft. The realm of wine is grounded in academism and we’re waiting with bated breath for a movement that will genuinely break with this rampant conformism. In sum, the wine world is still waiting for its own version of the “Salon des Refusés”, the 1859 show in Paris where emerging artists, who would later form the heart of Impressionism, were shut out by the powers that be. One of those artists was a certain Edouard Manet who wasn’t allow to show his iconic “Déjeuner sur l’herbe”, yet would go on to international acclaim anyway.

Wine IS a work of art

After unapologetically arguing against wine as art, let’s take the opposite tack. The theme of contemplation is not limited to just two senses (sight and sound), and sometimes a special food or beverage can have effects that go beyond quenching thirst or sating an appetite. Our limbic system generates, when we drink certain wines, an emotional reaction that is analogous to the reaction after viewing art or listening to music, for example. Tasting wine can sometimes trigger emotions that are very personal and individual, and can recall images from our past or create a mood.

There is undeniably an esthetic component to special wines, at least in the way they’re - artfully - described by marketers. The specific vocabulary that is used to describe a bottle of wine is like (and borrowed from) artistic discourse; the same inter-sensorial metaphors linked to our 5 senses are used when talking about wine (“elegant, balanced, refined, lively”). If you’re familiar with musical terms then stop a minute and listen to how a sommelier talks about wine, you’ll see a lot of linguistic similarities.

Art can’t be reproduced? This argument is debunked as well by the example of music. Indeed, millions of people can hear the same song over and over again yet is the Beatles’ “Let it Be” not a singular work of art? Turning to the visual arts, Andy Warhol, by inventing Pop Art, disproved the diktat that art can’t be reproduced, making art more accessible in the process. It can also be argued that each vintage is the unique expression of a season’s harvest.

Regarding museums: While looking at wine bottles in a museum doesn’t make much sense, more and more wineries are hiring artists to create unique works such as labels that are shown in art exhibitions. Mouton Rothschild, Leeuwin Estate in Australia, the aforementioned St. Chinian as well as Château Puech Haut are just a few examples. 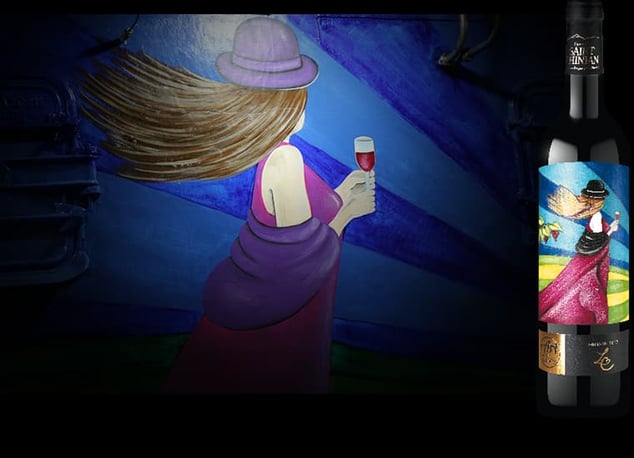 To paraphrase Yayoi Kusama: “Art does not necessarily send a message”, which is also the case for wine. However, despite the lack of social or political message, the idea of intention is critical for a prestigious wine, just as it is for every artist. The winemaker has at their disposal a raw material that is the terroir, and decides how to interpret it. The final composition of the wine depends on the terroir (i.e., the combination of soil, exposition, weather among other natural factors), and like painters from the realism movement who reproduced their surroundings as precisely and soberly as possible, some winemakers intervene as little as possible, letting nature do most of the work.

Others take a different approach, shaping their terroir and its grapes based on their own vision (impressionism, post-impressionism?) while others take a more scientific tack. Take, for example, the case of two talented winemakers, working with the same exact terroir but who have diametrically opposed philosophies about winemaking: the result will invariably be two very different wines. An outstanding wine is the translation of an emotion based on the perception of a terroir. The winemaker will attempt to translate his or her own truth.

As for the wine drinkers, their perception of the winemakers' message - just like a painting or a sculpture - is subjective and can deviate from what the winemaker was trying to express or produce. Both artistic and wine experiences are idiosyncratic, i.e. singular and highly personal. Through their work, artists try to send a message but this can be distorted by the simple fact that spectators are casting their own gaze on the work and making their own interpretation of it. The same happens with wine. This degree of latitude in how a work of art or a glass of wine is interpreted is critical in this discussion.

Regarding the various ‘movements’, you don’t need to be an expert to see that more and more professionals are adapting to environmental changes and to the needs of customers who seek healthier and more environmentally-friendly wines. Many producers have transitioned to organic, biodynamic or natural wine. Take a stroll through Prowein in Dusseldorf or Vinexpo in Paris, and you’ll see that the percentage of organic or biodynamic wines has increased markedly. Many wineries, particularly in Switzerland, are stepping back from the scripture of modern winemaking. Thankfully, there are wine producers willing to deviate from the norm, to the delight of adventurous connoisseurs.

Personally, I believe that some wines are like an ephemeral work of art, such as an artistic performance. Certain winemakers are undoubtedly artists, both in the way they express their terroir and how they apply their own sense and sensibility. The way in which winemakers interact with the terroir and other basic inputs is sometimes so personal that their wine depends less on having a good terroir to work with but rather how they interpret that terroir.

I asked several winemakers and industry professionals the question “Is wine a work of art and the winemaker an artist?" Unsurprisingly, the responses vary tremendously, which underscores the fact that there is no one right answer to this fascinating question. 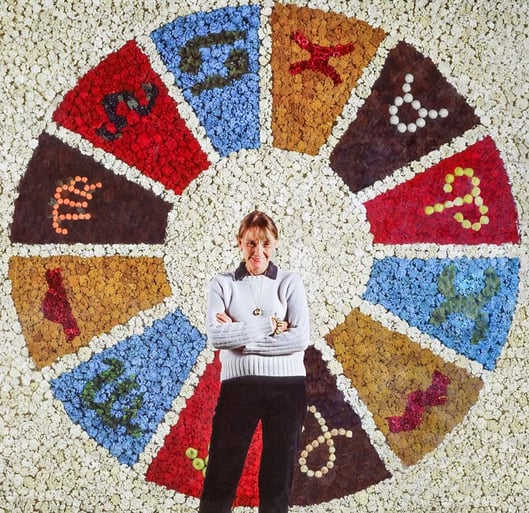 The terroir is ultimately the real artist

The interpretation of the terroir is a recurring notion for many wine makers (sometimes analogies with famous composers are drawn) with the implicit condition that that terroir is of top-notch quality. The wine producer has an influence on the way in which the wine will reflect the terroir. To quote Vincent Carême “Wine resembles its producer”.

A question has not yet been raised in this text: At what point does a wine become an artwork and the winemaker an artist? The answer given by Aubert de Villaine is very interesting:

“Are works of art reserved exclusively for the grands crus from the most well-known appellations? I don’t think so, although it would be a crime for a wine producer entrusted with such prestigious vineyards to not strive for excellence. Perhaps then, wine from a more modest appellation could indeed be a work of art and its producer an artist. Striving for and reaching excellence with a more ho-hum appellation is more impressive than producing great wine from a great vineyard. Of course, extracting excellent wine from an average vineyard is much more impressive than a grand cru that falls short of its potential. Therefore, this debate depends entirely on the philosophy of the wine producer who alone can unlock the artistic potential of a “terroir” wine. This potential can only be reached through the work of the wine producer who is therefore also an artist."