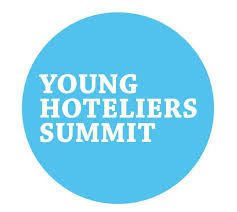 This article was originally published on the Young Hoteliers Summit News Room.

A potential revival or risk?

The new big thing in aviation!

The Travel Bubble is an opportunity for businesses to reopen, and a glimmer of hope for the people that life is getting back to normal." Saulius Skvernelis, Former Prime Minister of Lithuania

Air bubbles, travel bridges, corona corridors, it goes by many names, but what is the latest trend in air travel all about?

The aviation industry is significantly affected in the last couple of months due to the current pandemic, and many countries' economies are suffering too. The lack of tourism significantly impacted overall wealth. As a response, many countries have decided to make travel arrangements between them and other select states to facilitate movement and restore their GDP.

It all started in May 2020 with three Baltic countries: Estonia, Latvia, and Lithuania. They decided to have an exclusive trilateral agreement, granting entry to each other’s territories and reactivating trade relations. Essentially, air bubbles are specific partnerships where selected countries that have shown success in containing the virus can enjoy free travel within the zone without on-arrival quarantine. It is important to note that transmitting the virus within the travel bubble is extremely unlikely as the countries involved have exhibited proper measures in managing the outbreak. However, the unpredictability of the virus does present a flight risk as the bubbles might burst leaving voyageurs having to cut their trips short and make it home in time. 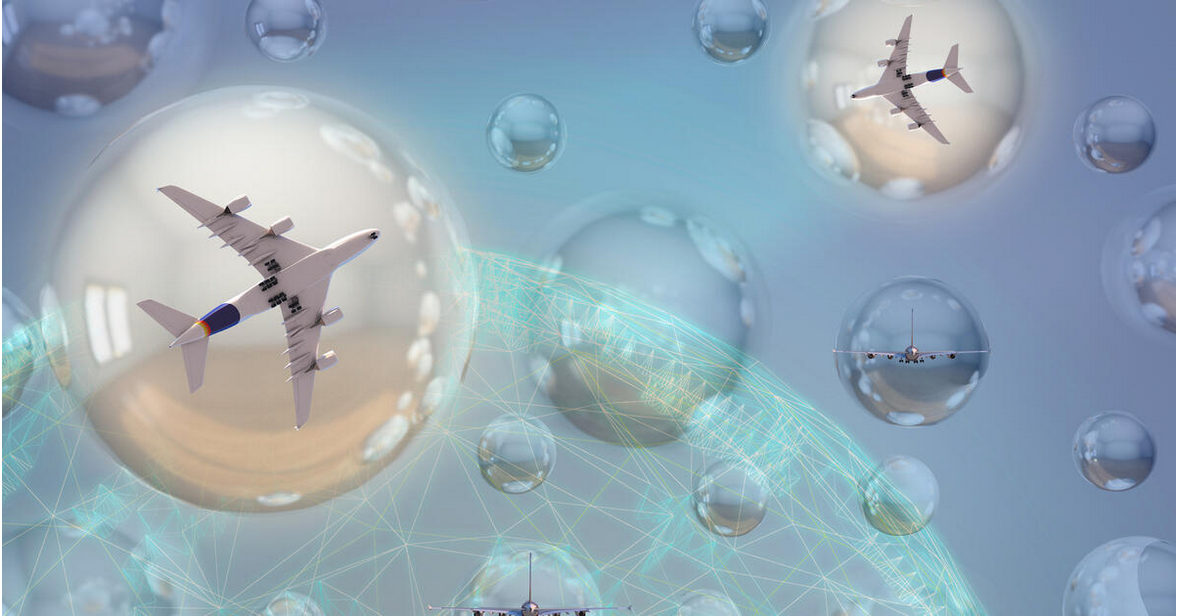 Now that we know where travel bubbles originated and what it means, let us dive into everything you need to know about the new big thing in aviation.

Where are the Travel Bubbles?

Every day, more and more countries open their boarders to pre-arranged allies. The number of travel bubbles outside of Asia is rapidly expanding, with customised and constantly adjusted entry regulations. After the three Baltic pioneers, the "Re-Open EU" commission has enabled Europe to ease their travel restrictions inside the union and with outside countries. 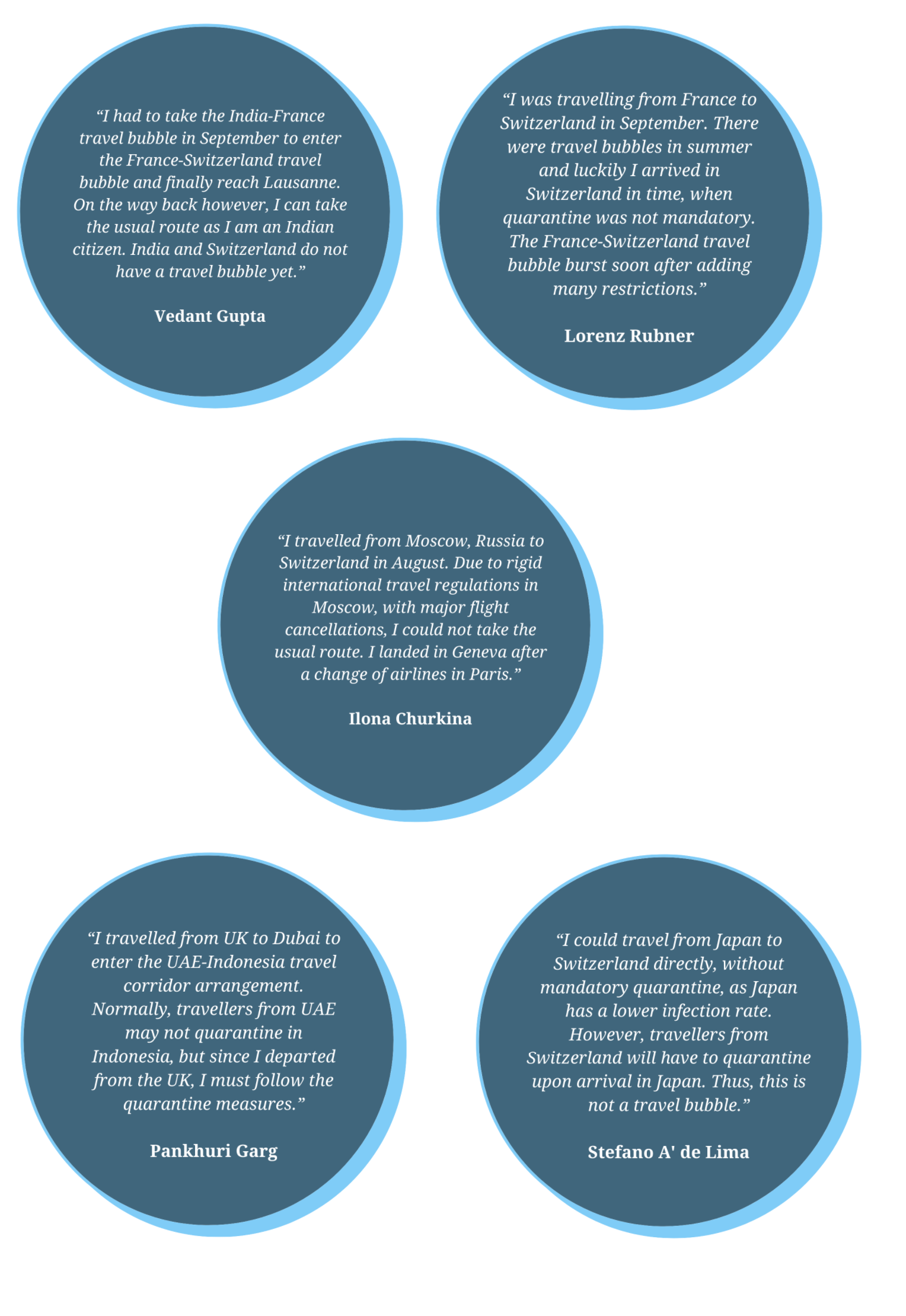 Pros vs. cons of the Travel Bubble strategy

The safe corridors allow citizens and residents of certain countries to travel freely within the bubble. This arrangement aims at bringing some degree of additional freedom without causing additional harm.

In the months of completely restricted travel there has been a profound impact on the global economy. The World Travel and Tourism Council has identified one in ten jobs related to travel and tourism, putting at least 100 million jobs at risk, as confirmed by UNWTO. The Aviation industry has lost billions of dollars in revenues already, and to keep the industry afloat it is essential to provide some relief with possible travel avenues.

While it is economically imperative, it is also a matter of safety. Thus, all travel alliances are based on the ability of partner countries to contain the outbreak of the virus. Travel Alliances are formed between countries that have very low or similar amount of risk and respond to the pandemic in the same way – with widespread testing, contact tracing and effective quarantining. “In such a case, for neither country there is a need to close the border to ‘protect’ the citizens from a higher incidence of cases due to travellers from the other country,” says Per Block an Oxford University Researcher in Social Mobility.

The travel bubbles do come with certain testing requirements to avoid quarantine in a safe manner. For example, the Estonia, Latvia and Lithuania bubble requires a negative PCR test result not older than 48 hours and the Hong Kong-Singapore bubble will require a test taken not more than 72 hours prior to arrival. Additionally, Singapore plans to limit at a quota of 200 travellers per day into each city.

Having weighed the abilities and success of partner countries in mitigating the flare-up, the chances of travellers transmitting or contracting the virus within the travel bubble are extremely unlikely. This strategy becomes increasingly essential as industries and economies continue to suffer from a shut down.

While the travel bubbles support the tourism industry through these unprecedented times, they also pose additional health and security risks in an already complicated world.

Before analysing the evident health problems caused by travel bubbles, let us look at the tricky situation they have put many travellers in when bursting. For instance, when the travel bubble between the UK and Spain abruptly burst towards the end of July, British citizens were forced to rush home and enter a 14-day quarantine there. Furthermore, the bursting of travel bubbles has led to countless canceled bookings which travel insurances refuse to reimburse as they claim that travellers were aware of the risk while booking. However, most travellers suffer from sudden developments in the arrangements.

It has now been proven that 35% of COVID-19 cases worldwide are linked to tourism. Nevertheless, instead of controlling the outbreak, countries from the European Union tackled economic pressures by launching “Re-Open EU”, a travel bubble including most countries forming the border-free Schengen zone last summer. With that bubble bursting this fall and most European countries currently undergoing another lockdown, the "Re-Open EU" commission has failed.

Asymptomatic or pre-symptomatic travellers entering foreign countries restriction-free might cause an outbreak. Their country of origin recording lower cases does not guarantee their health. Travellers responsible for new cases would be especially crushing for countries like Singapore or Hong Kong, that have excelled at containing the spread. As seen, the HK-SG bubble has been delayed due to paramount health concerns.

What do you think? Are travel bubbles safe?

Every year, YHS welcomes speakers and student delegates from over 40 leading hospitality institutions, as well as members of the media and other external guests at the summit. Building on a different theme each year, YHS serves as a platform for insightful and engaging debates and discussions on the most Topical issues of the hospitality industry. For more information on the panels, schedule, and YHS in general, please visit us at www.yhsglobal.com.
Tags :
Hospitality Industry
Travel & Tourism

Benefits and difficulties of CSR management in travel and leisure companies