Take charge of your capital: You may think you are, but this may not be the case

The importance of trust and communication during these days of COVID-19.

As you’re reading this, regardless of where in the capital stack you sit, you probably have a stronger than usual desire to know exactly what’s going on with the underlying asset, the cash flow, the promised CapEx program, the debt covenant compliance and how badly you mispriced your risk. Should this be the case, rest assured, you’re not alone.

Your focus is likely on re-balancing your risk/return proposition the best you can by either 1) increasing your return or 2) decreasing your risk. During these Covid-19 days, the most likely strategy to succeed would be the latter. Or is it? Given the right agreements with the right parties, and a shared understanding of the potential and ability of each of these parties, the future may hold a considerably higher return for all.

It is the aim of this article is to bring all the parties to any capital structure together, to temporarily share whatever cash flow is available (if any), equally, and trust each other to survive today, becoming stronger tomorrow and thriving the day after in a way that puts the base-case business plan to shame.

Try for a second to forget what you have read about capital and its use and definition in the textbooks. Then, consider this: Capital consists of both a monetary and a reputational component.

The phrase “cash flows down and risk flows up” may sound familiar. Cash flow is simple. It’s the monetary component of the return of an investment (monetary and reputational). Attached to the monetary return is the often-underestimated concept of reputational return, which is less tangible, but defines the ability to maintain and grow the monetary return over the medium- and long-term. The two cannot be separated, and in times of deterioration or complete absence of the monetary return, the relationship becomes more apparent and visible.

To avoid any doubt, it is the opinion of this essay that the reason for investing in anything is the prospect of a monetary return. This component is the main driver for entering capital. Without the need or desire for a monetary return, the reputational is irrelevant.

It is the opinion of this article that total risk is static from deal birth, and that the changing item is based on the level of awareness of uncertainty, which leads to the apparent and visible imbalance of the risk/return proposition - mispricing of the risk. The only way to change a risk proposition, is by temporarily or permanently putting new agreements and changes in subordination levels in place.

2. What is your Capital?


Every capital structure is made up of agreements of who gets what and when. When normally represents your risk and what is your return. If you have priced your risk correctly, the two curves are crossing and your price-point is at the meeting point of the two curves. Pricing risk 100% correctly is not possible, courtesy of absolute uncertainty - the great unknown unknow. All one can do is look at how the market is pricing comparable risk across the capital stack,and make sure your own cost of capital (compared to your ability to handle the risk) gives you an edge.

Despite not being in the monetary capital, the Brand and Management is very much in the reputational and has such a profound impact on the appreciation or depreciation of the monetary capital that the Equity Investor (Owner) and Debt Investor (Lender) rely heavily on the reputation of the Brand and Management, for the purpose of the entering the capital to begin with. As such, the latter is senior to everybody else in the cash flow waterfall.

Some investors and lenders, and even brands and management companies themselves, view the brand and management solely as service providers and that the fees they earn are the cost of operations. It is a perfectly logical way of looking at it in a normal market situation.

The Uniform System of Accounts for Hotels tells you so, and as one can rightfully argue, it’s above the line. However, this is not the way the equity and debt investors look at it during extended periods when cash flow is insufficient to even cover the senior lender’s interest payments. Over time, the line “they (brand / management) are not performing or taking any capital risk, and they are getting paid – they should share the pain” has been well-rehearsed. Under normal market circumstances, this line is used in rare and special cases, in siloed conversations between the equity investor and the lender’s work-out manager. However, these days, it’s used globally, all the time. 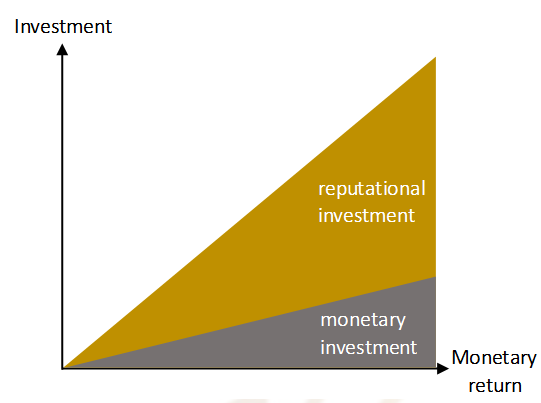 From this standpoint, all involved in the hotel are a part of the capital and contribute to the brand’s franchise fees, the manager’s fees, the senior and junior lender’s debt service, the hedge counterpart’s security and the investor’s dividends. Leaving one of these parties out of the conversation of who gets what and when, would skew the risk/return balance and leave the risk mispriced.

The waterfall / the historical silos

In line with the opinion on this essay, the following waterfall represents the Capital. 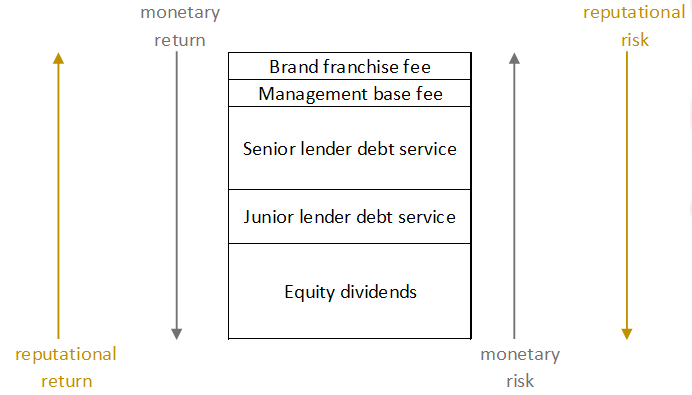 Traditionally, the negotiations and conversations in the capital structure are siloed and largely ignore the reputational capital. The answer to the question: “Who in the capital do you negotiate and make agreements with”? will vary depending on who you ask. Typically these are some of the answers you will receive: 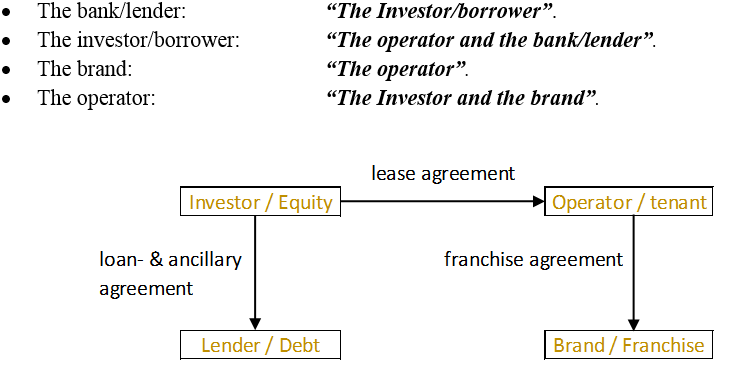 If you, thus far, agree and subscribe to this essay’s opinions on capital, risk, and return, you will agree that the above flow charts are missing some communication lines. You may also agree that the parties that are disconnected, are leaving the fate and control of their capital (monetary and reputational) in the hands of the connected party. As mentioned, the reputational component of the risk/return proposition is largely ignored. This is not only because of the historical exclusion of one party by another, but also a function of the excluded party’s lack of interest in the capital, as they do not consider themselves a party to it. These days, the flow charts should look at the following (please see the following page):

Needless to say, the underlying tone of this article is that of inclusion. Inclusion of all the parties to the capital, monetary and reputational.

When a transaction crystallizes and the capital comes together, there’s enough existing or projected cash-flow to go around, and all parties are happy and excited about the future. As such, the agreements made of who gets what and when, are made from the standpoint that each stakeholder will receive a monetary return balanced and priced according to monetary risk, and the brand and management are mostly treated as service providers. The inductive leap that the reputational components will follow suit, is made - if this component is considered at all.

When the existing or projected cash-flow deteriorates, the senior party in the cash flow and capital waterfalls are faced with the choice of either showing solidarity with the subordinated party and increase its reputational return and lower its monetary return. Or, sticking to the contract, increasing its monetary return (in-proportional to its capital partners and its subordination level) and lowering its reputational return. This concept of inclusion should not be done blindfolded though. Like every other investment, it should be done on an informed basis (in conference calls and rooms with proscribed distance).

This is where communication and trust come into the picture – these two concepts are the foundations of everything. Increasing your monetary return at the expense of your capital partner will increase your reputational risk proportionally and vice versa. Looking at the previously-shown capital stack, try to turn the subordination levels vertical instead of horizontal, temporarily, so that all parties become pari passu to one another; each party having the same rights, the same risk and the same return at the same time. 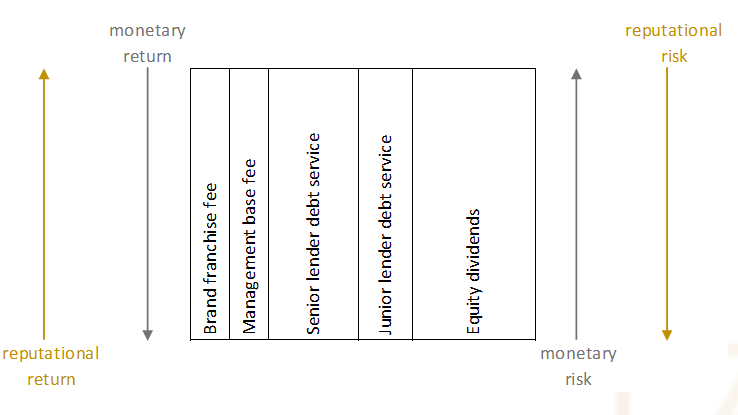 The above capital stack should be in place on a temporary basis and any new agreements should have an expiration date. The monetary and reputational curves will shift back from crossing to parallel as COVID-19 comes under control, borders re-open, people start traveling again and cash flow returns to the waterfall.

Are you in charge of your capital?

So, we return to the main question: Are you in charge of your capital, monetary as well as reputational? This article aims to encourage you to think about it. Are you eating away at your reputational capital, and your ability to maintain and grow your monetary return in the future, because you are stuck in the historical silos for some reason?

Are you aware of the short- and medium-term monetary capital intentions and strength of your monetary and reputational capital partners? And are they aware of yours? Do you know where you stand in these intentions? Do you know the level of impact additional monetary investments made by you into the hotel will have on your monetary and reputational capital partners’ ability to strengthen their position, and thus strengthen yours?

These are just a few of the questions you should be asking yourself. If you think about it, at this time of uncertainty, wouldn’t you, wherever in the capital stack you sit, be better off if you at least knew where your partners stand today and tomorrow?

Finally, a note about time: Time is your friend - if you have it. Make sure you do by making agreements with the people and parties that directly and indirectly have an impact on your ability to remain in the capital through this (hopefully) once in a lifetime crisis. Thank you for reading.

How to create a Great Place to Work?

To pay or not to pay: when dividend policy rhymes with business strategy

ARC Bar: a heart-warming story of a unique concept venue for the able and disabled