Globally, pet care represents a huge market that’s worth some 180 billion USD. So even though the panel discussion at the Window 2 the Future forum was supposed to focus on globalization generally, perhaps it was inevitable that pet care (and pet hotels) would come under the spotlight, especially as one of the panelists was a senior executive with a pet food firm, which is owned by Nestlé.

Philippe Perianin, Head of Business Development & Ecosystem at Nestlé Purina Pet Care Europe, Middle East & Africa (EMEA), told the forum the market was growing steadily. “When you look at Europe for example, Europe has 200 million pets. If you look at countries like France or the UK, already half of the households have pets.”

Nowadays, he said, people want to travel with their pets, or at least make sure someone is taking care of them at home. “When they go to your hotel, they would expect to have all the necessary facilities and hospitality.”

Pet owners have become ‘pet parents’, he said, as “the pet is becoming the additional kid in the family. So people expect exactly the same type of service and experience for their pet.”

He added that one low-cost airline in Europe – EasyJet – has just launched a pet-sitting service “so that when pet parents are traveling, they don’t have to worry about the pet staying at home alone.”

“So we have to keep in mind that pets will become a customer relatively soon”. Consequently the hotel industry will have to figure out how to “bring hospitality as well to these new customers”. 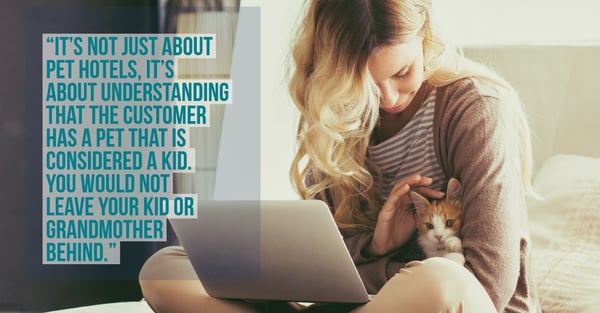 Samih Sawaris, Chairman of Orascom Development Holding, chimed in with an example from his hotel chain. “Two years ago somebody in El Gouna (Orasacom’s flagship town in Egypt) came up to me and said ‘I want to make a hotel for pets’. I said, ‘Fine with me. It’s a crazy idea, I’ve never heard of it but go ahead.’”

The hotel now enjoys the highest occupancy rate in El Gouna and has performed ‘beyond our expectations’, he said. “People are actually traveling to El Gouna with their pets because they know they can leave their dogs part, or all, of the time in this amazing hotel which has a playground for pets. It’s a very good business.”

The moderator, Mary Gostelow of the Gostelow Report, highlighted how in the Hyatt Regency in Hakone, Japan there are pet rooms with special pet showers. The pet rooms, she added, have 100 percent occupancy.

Another panelist, Yaron Ashkenazi, the CEO of GCH Hotel Group, jokingly referred to pets as a ‘niche’ market, a play on words given that, in French, the term can refer to a kennel. “It’s a great idea.”

One call in 10 to his hotel chain can be about pets so “we’re developing a program that will not only make sure they (the hotels) will have the pets but we also have a dog walker that can walk the dogs outside the hotel.”

During the question and answer portion of the session, Catalin Cighi of Cain Hospitality Innovation (CHI) brought the discussion back to the issue of the ‘neglected audience’ of pets and asked how more pet parents could be encouraged to bring along their dependents.

“I didn’t come up with the idea of a hotel for pets, but when we saw what success it brought, we built on it,” Sawiris replied. “It’s going to be embraced in all the destinations we develop because I do believe this is an addition that would attract more clients, not to mention that it’s very profitable on its own.”

And how do they make it profitable? “You charge a hell of a lot,” came the response.

The Window 2 the Future forum, staged at École hôteliere de Lausanne on April 30th, was organized by Lausanne Hospitality Consulting.