(Not) Leaving on a Jet Plane

Assessing the global aviation situation and harnessing possible solutions in its quest for survival. Not just the pros and cons of private credits versus government funding, but also the need for solidarity and the role of environmental issues.

Data from the World Tourism Organisation highlights that global tourism expenditures have tripled between 2000 and 2018. This strong increase has come to a sudden halt in the wake of the Covid-19 crisis. While some countries forbid their population to step outside (apart from grocery shopping and medical matters), others are a bit more lenient in their approach. They, however, all share the fact that touristic activities are off the agenda. Hotels and restaurants are closed, as are man-made or natural tourist attractions. Finally, many borders have been closed and air traffic reduced to the strict minimum, only allowing for the repatriation of stranded citizens. As a consequence, even busy hubs such as Singapore, Frankfurt and New York have seen their airport activities reduced by more than 90%.

The global aviation industry has been hit hard throughout the world and former aviation crises such as the September 11 terrorist attacks or the 2010 Eyjafjallajökull eruption now look like small blips in comparison. According to the International Air Transport Association (IATA) airlines could accumulate losses of around 252 billion USD in 2020. Compared to 2019, flights have decreased by around 90% so far, and over the entire year a reduction of 40% of flights is possible. This will push many airlines, already working on low margins or losses, into financial distress rather sooner than later.

Using the Z-score for assessment

While the situation is dire for most, if not all airlines worldwide, irrespective of business model, size or location, some airlines are more at risk than others. So in times of the survival of the fittest, which airlines are better positioned? The Z-score proposed by Edward Altman in the 1960s helps understanding bankruptcy risk and delivers some insightful indications. The model is not able to predict the odds of a company going into financial distress, but it analyses and aggregates different corporate dimensions which have been shown to be important in the case of bankruptcy. These include short term liquidity, solvency, leverage, profitability and asset turnover. As the calculations are based on accounting data, they evidently do not take into account current rescue plans and cost reduction programs, but can help us understand which airlines were more at risk of financial distress before the crisis even started. In this vein, an Altman Z-score lower than 1.8 indicates an airline may be directed for financial distress, while a score closer to 3 hints at an airline with financial strength.

Analysing the latest accounting data (FY 2019) for some European carriers, we find that low-cost carriers (apart from Norwegian) seem a priori to have the best financial positioning with scores above 1.8. The large national carriers have scores between 1.36 (SAS) and 0.86 (Air France-KLM) showing that European carriers are, generally, not in the best position to weather this crisis without external help. 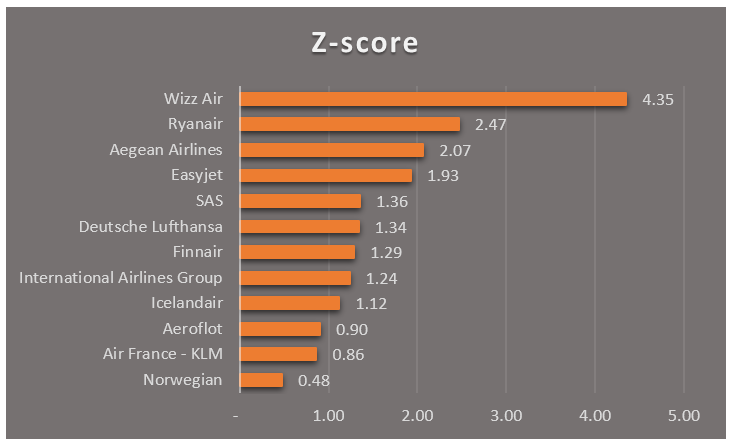 The winners, losers and those in between

What is the takeaway from these different scores? The figure clearly shows that not all airlines started off in this crisis on an equal footing. Some companies were already, de facto, in financial distress at the beginning of the year, e.g. Norwegian. As this carrier is in direct competition with SAS, government support may be difficult to implement without alienating neighbouring countries or creating competitive distortions between the two airlines. Norwegian, indeed looks in the most dire position compared to other companies.

Others such as IAG, Air France-KLM can count on support from their respective governments since they are deemed systemic to the well-functioning of the economy, or the state already owns an equity stake. This may lead to a lower Z-score as government guarantees take some pressure off financial performance and allow for more aggressive operations. However, following consolidation in the industry over the past decade, most of these carriers today are pan-European. This may lead to governance issues and political tensions in case of financial lifelines by governments.

Finally, we have pan-European low-cost carriers (e.g. Wizz Air, Ryanair, EasyJet) which appear the most solid according to the Z-scores and which have performed rather well over the past few years. They, however, need a financially solid model as they, in theory can rely less on government backing. Even today, financial support for these companies may be the most difficult to orchestrate for different reasons: They do not belong to a single country (most have operating subsidiaries in different European countries), the population is less emotionally attached to them compared to national carriers, government money is not infinite and in times of environmental considerations the low-cost model may not be deemed suitable to be entirely saved.

All airlines have started to react to the crisis by cutting costs. Most have by now grounded their entire fleet and have put, whenever possible, their staff into unemployment schemes offered by governments. They have also started to give credit notes to passengers whose flights were cancelled instead of reimbursements and cancellation penalties under EU law. This last point alone would tip most airlines into financial distress and regulations will have to come into effect to resolve this issue by the European Union. Finally, airlines have used their planes to transport cargo in order to generate some revenues. While these are first steps to alleviate the impact of travel bans they will not be sufficient and it today seems obvious that every airline will need additional money and much more help to survive. So what are possible financing solutions to this dire situation and what issues do airlines face in their quest for survival? We see three major possibilities.

Overall, there is no miracle solution but a coordinated and solidary intervention by all European actors may well be the only way for airlines to survive the largest crisis ever encountered. The different governments will, for once, not have much choice but to work together due to the pan-European nature of the industry. They may also link their support to other topics such as environmental issues, the positioning of the airline industry as compared to other transportation means such as trains, or further consolidation waves to not only save airlines today but to shape the future of the industry for the years to come. 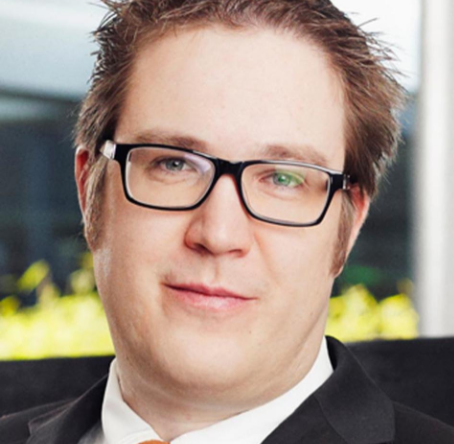