What does it take for a product created more than 150 years ago to remain relevant, speak to younger generations and tag along with premium brands? Sylvain Orebi, founder of Orientis Group and owner of flagship brand Kusmi Tea, spoke at Ecole hôtelière de Lausanne on Kusmi Tea's brand transformation.

When the Orebi brothers had just taken over Kusmi Tea in 2003, the products were selling at an average price and with uneven success. Back then, several tea houses were trying to outpace the competition by promoting the tradition and unique mastery with which their blends were created.

The main focus for the majority of them was the preservation of tea’s artisanal character, but Kusmi was starting to think ahead of its time.

In 2006, the company took a completely unexpected direction by bringing a touch of modernity to their strategy that gave a strong differentiation factor.

Kusmi Tea did not want to sell tea anymore; that was not exciting enough. Instead, they wanted to sell dreams.

That was the reason why Kusmi’s image shifted from a hot beverage to a lifestyle of wellness and beauty. To build up on this new reputation, communication and customer relations took on a greater role. Contrary to other tea-houses that had PR’s with a handful of contacts in the F&B industry, Kusmi hired a PR specialized in beauty.

The ultimate goal was to develop a shared sense of values by focusing on wellness and conveying that to the customer.

By renovating their image, Kusmi started to attract more adventurous customers, those who tend to be trend setters. The marketing team had spotted the increasing importance of fashion and found a way to link them to their brand.

Therefore, Kusmi started to open new boutiques which design departed from the traditional colonial looks that characterized the tea-drinking culture. 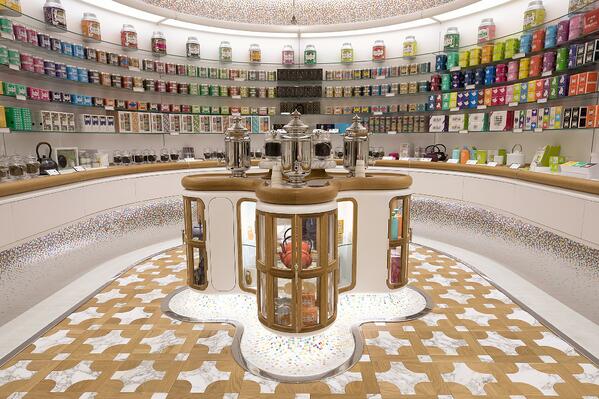 Their new display was stunning, colorful, edge cutting and baroque at the same time. The outcome resulted in a more contemporary design that is still able to celebrate the oldest rituals of tea origins.

Furthermore, Kusmi launched an innovative campaign to advertise tea like no other brand did before. A series of short films were released to express the beauty of blends without even talking about tea. The stories were about famous characters from diverse cultures, who could to co-exist harmonically and love each other despite their differences.

For many years, tea-drinking tradition has strongly been related to a warm beverage drank at a particular time of the day: tea time. Kusmi has been exploiting the richness of the product to get rid of time-labels.

For Kusmi, tea-drinking is timeless, that is why they invested efforts on creating a wide range of tea-products tailored for different times of the day.

The Orebi brothers partnered with Evian in order to create a new experience that included a range of sophisticated iced tea recipes that combine Evian natural water, tea infusions and a variety of fruit, floral and herbal aromas. Kusmi has also launched a range of tea bags with ideal format for preparation of iced teas – such as the frozen maicha- and other lines which are great for creating cocktails- like the Kusmipolitan based on vodka.

Award-winning sustainability and wellness at the Maya Boutique Hotel

Changes in the industry: EHL Hospitality talents share their views

The benefits of service design