Hospitality with heart: Branching out into the pandemic relief effort

Since the worldwide safety measures to combat COVID-19 were announced two months ago, much has been written about the disastrous impact of lockdown on industry, none more sensitive than the sector of F&B, hotels, airlines and travel. The litany of nosediving businesses faced with immediate crisis was diametrically opposed to the spread of the virus in full ascent. While we wait to see if the worst is over and what the new security measures entail, it’s inspiring to read of how certain hospitality establishments have made a success in reminding us that empathy, community and inventiveness are as much at the heart of this particular business as revenue and profit.

Hotels offering free rooms to medical staff became headline news at the start of the pandemic with renowned establishments such as Claridge’s in London and the Four Seasons in New York opening their doors to beleaguered hospital workers on long shifts or those recruited from afar. Claridge’s, boasting zero shutdowns in their 200-year history, gave 40 rooms over to Nation Health Service medics, waiving the usual cost of £650 per night and offering breakfast, packed lunch and dinner to be left outside each door. Staff from the sister hotels, The Connaught and The Berkeley, volunteered to help run operations and also donated thousands of hygiene amenities from soap to toothbrushes. The only constraints: no elevator, no room service and no room cleaning – still a great deal!

“Just as it has in the past world wars, Claridge’s has a duty to step up and support the people of London. Teams from all our hotels have volunteered to help and support the dedicated NHS workers at this critical time. We are forever in their debt,” said Paddy McKillen, the co-owner of the Maybourne Hotel Group.

Wealthy members of the UK football establishment also followed suit, (perhaps humbled by their inordinately large salaries compared to those of British health workers). Chelsea owner Roman Abramovich made his Millennium Hotel at Stamford Bridge available to medics in north-west London, while Manchester United legends - Gary Neville and Ryan Giggs - temporarily closed their two Manchester-based hotels to make room for medical professionals, whilst also ensuring that there would be no staff redundancies or unpaid leave.

At the end of March, Airbnb launched “Frontline Stays”, a program to house 100,000 healthcare staff around the world allowing them to be close to their patients whilst safely distanced from their own families. This initiative meant essential healthcare workers could book accommodation in 160 countries and regions, with hosts in Paris, New York City, Barcelona and London each offering over 2,000 places to stay in their cities for those doing lifesaving work. Airbnb waived all fees on the first 100,000 stays booked through this program, quoting “We may be apart, but we’ll get through this together.”

Michelin star chef, Takashi Kinoshita of the four-star Château de Courban hotel in the heart of Burgundy’s vineyards, was one of the many chefs who found himself temporarily out of work. Unable to cook for his usual clientele, he started turning out dishes for the doctors, nurses and staff working round the clock at Dijon hospital. Admittedly, the menu was downscaled in glamour since the aim was to use up all the perishable food lingering in the hotel’s kitchen store cupboards, augmented by local donations. 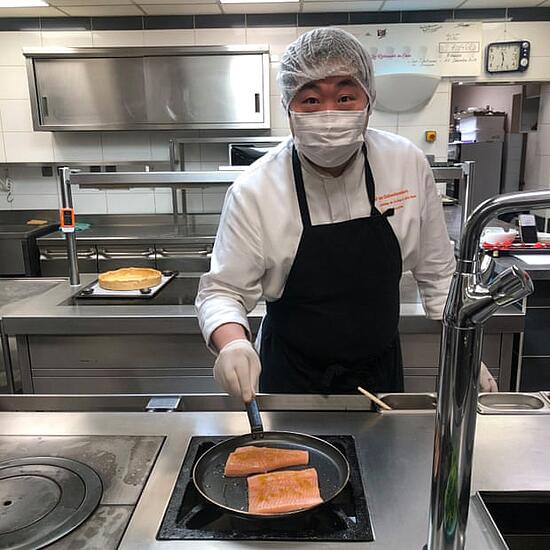 For the hungry medics, Takashi – equipped with mask and gloves as well as his chef’s whites – created hearty feasts of quiche with vegetables and trout, mixed salad spring rolls in soft wraps and cream-filled choux pastries. Every Sunday, in a borrowed refrigerated van, Kinoshita set off to deliver 100 simple three-course meals to hospital staff.

“We are making what we can using what we have in stock and ingredients donated by local producers who didn’t even think twice before showing their support and solidarity,” he said. “It’s different from creating a gastronomic menu because the health workers need to eat something quick, substantial and balanced. In Japan, if there is a catastrophe the cultural response is to make something to eat, so I’m very happy to be doing this. Besides, it’s my job. Where else would I be but in my kitchen?”

Kinoshita, who grew up in a Tokyo suburb, came to France in 2002 and after working under several illustrious chefs and a spell in the kitchens at the Élysée Palace, became master of his own kitchen at the Château de Courban in 2015.

From spirits to sanitizer

Many big names in booze, from Budweiser to Pernod, along with smaller home-based distilleries, took little time in switching operations to address the hand sanitizer shortage. For example, the small LA-based distillery, Amass, run by pregnant Morgan McLachlan who at the start of March realized that all stores in her area had run out of hand sanitizer as lockdown was approaching.

“I thought, well, as a master distiller, I have access to alcohol and I have the technical know-how to produce sanitizer properly. I’ll just make my own. The formulation that I came up with is based on the Four Thieves recipe, a medieval botanical blend thought to protect against the spread of plague. It’s a combination of eucalyptus, cloves, cinnamon, and allspice that I then blended with alcohol, glycerin, and aloe. With that, I had sanitizer.”

With the gin and vodka on hold for the time being, Morgan has been selling her fragrant, bespoke sanitizer online and donating part of the sale proceeds to the United States Bartenders’ Guild’s relief efforts for restaurant and bar service workers hard hit by the closures. Despite the very small-scale operations with only two members working on production at the same time for obvious health reasons, Amass had an extra 15,000 bottles of hand sanitizer ready for donation to the medical field at the end of March.

At the beginning of April, Ecole hôtelière de Lausanne set up free access to an online course extracted from its MBA in Hospitality program. Part of the “Performing through business cycles” module, a condensed version of the course “Managing Underperforming Properties” was created and made available to all industry professionals looking to mitigate current and future losses.

Through this resource portal, EHL Advisory Services, the Group’s consulting entity, has been offering pro bono advice in a subsection called “You ask, we answer”. Many hospitality professionals around the world are scrambling to ensure the livelihood of their staff and trying to keep their business afloat until the end of the pandemic. EHL experts are equipped with guidance on such things as where to get help, how to implement cost savings during and after the crisis, or how to re-hire and re-launch operations post-pandemic.

“Now that the most urgent matters, such as the safety of our students and staff, and distance learning solutions, have been resolved, we are currently looking into how best to contribute. As a house of knowledge, our greatest weapon to join this fight is information sharing and we therefore see it as our responsibility to take action, by any means at our disposal”, commented Michel Rochat, EHL Group CEO.

The list is endless of spontaneous community-based initiatives helping to ease the weight of confinement and push the relief efforts along - all of which go to show that there is a real desire for human connectivity at the heart of hospitality; an important factor which will indeed be the key driver in its imminent renewal and recovery.

Flying Post-Covid-19 Air Travel: What You Need to Know

Sustainability: more relevant to the future of tourism than ever?

Award-winning sustainability and wellness at the Maya Boutique Hotel