Five CEOs, some 90 brands with more on the way, and an estimated combined worth of hundreds of billions of dollars. Five leading hoteliers from Accor, IHG, Hilton, Wyndham and Choice, were on stage together in Berlin for a panel discussion entitled ‘Evolution of the Brands’ at the recent International Hotel Investment Forum.

Owners are mainly interested in mitigating downside risk and return on investment, he said. As for brands, they want traffic and a brand which will resist down-cycles. “He wants a ‘big brother’ to help him in downturns, he wants to make sure you can put more money at work because he knows you and trusts you.”

He gave the example of Dubai owners who cancelled a contract after four years even though Accor had “done a hell of job delivering on every metric that we thought was valuable for the owners.” However, the owners actually wanted travelers from the Gulf region rather than Europe, as the hotel was in their mall and were more likely to spend money there.

More and more brands and sub-brands are coming on to the market. Accor itself has two dozen – half created, half acquired – even though just four years ago Bazin had thought brands were irrelevant.

I was dead wrong. I thought at the time brands could matter less. And it’s actually the opposite happening. Brands have enormous value, more so than I believed – (and they’re) strengthening.

“It’s actually a shortcut in a very crowded market. Brands matter. You talk to the OTAs (online travel agencies) … (and they) will tell you as well that the conversion factor is twice (as big) for branded hotels than non-branded because it matters to customers. They recognize this, they feel more comfortable, they know what to expect.”

“Whether you have too many brands doesn’t matter. Make sure you differentiate the experience, the values, the promise between each of the brands because they have to be different.”

The CEOs spoke of their brands as friends or children – and about how they need to be protected. Trendy brands may be ‘sexy’ and ‘appealing’ for a while, but somebody more trendy may come along in a few years. “Make sure you don’t ever kill your brand,” said Bazin. “Just protect it, because what the client wants is purity."

Hilton has added five brands over the past seven years to the nine it had as it looks for gaps in the market. It launched Tru a year ago to attract younger customers. “So it’s not surprising to me that Tru is off like a rocket ship,” said Hilton President and CEO Christopher Nassetta. “We’ve done 500 deals. We’ve got 20 open, we’re going to open 50 this year, we’ll open 100 next year and continue ramping.”

Nassetta also spoke of the need for consistency. Hilton has 180,000 team members, with another 200,000 in franchised properties. “And here’s the thing: our customers really don’t know which is which …. When I go to a property I don’t care whether it’s our people (or) a franchise.”

We’ve really worked hard as an organization to unify everybody around a purpose, a common set of goals and what we stand for, because ultimately that’s what the customers demand. In the end they want a distinctive experience. If our franchisee fails us, they fail the whole system. 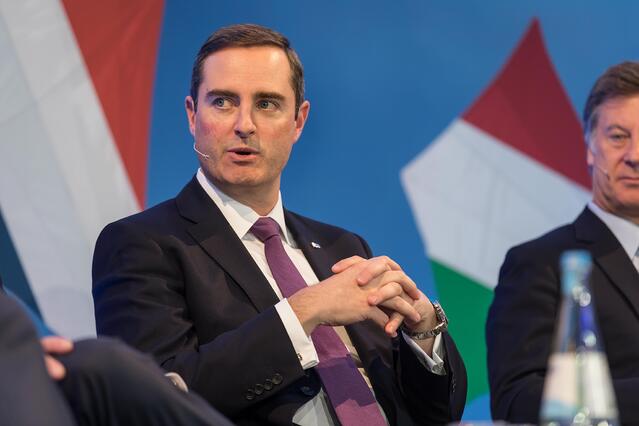 Keith Barr, CEO of IHG, told the session that his group would be launching a conversion brand later this year and would soon be announcing the acquisition of a luxury brand to sit above InterContinental which, he said, is already the largest luxury brand globally with 200 hotels and around 60 in the pipeline. However, some owners want a “price point above InterContinental with a different customer experience.” The new luxury brand “is going to be something small that has a great customer proposition and heritage,” Barr said, which “we can incubate, grow and scale up over time.”

“We grow our business by having owners spend billions of dollars every single year building hotels, getting behind our brands. And we have to be good stewards of those brands over their lifetime.”

You have to bring owners “into the tent,” he said, adding that they set up an advisory committee when launching avid hotels last September. They have so far signed 75 hotels. “It will be the next Holiday Inn Express for us because it plays to our core … so it makes sense for us to build that organically.” But in the luxury segment it makes more sense to go out and find a ‘great, small company’ to acquire.

You can’t live in a vacuum and assume we know everything. I think the companies that succeed the best, really engage with their owners deeply and talk about the brands.

“Just really leaning in heavily, that’s how you keep your brands great,” Barr said. “And you can’t become too arrogant.”

Wyndham Hotel Group, which has 21 brands and claims to be the largest player in the economy segment in the US, is now looking increasingly to the mid-scale and upper mid-scale space. In January, Wyndham announced the acquisition of mid-scale hotel group La Quinta for 1.95 billion dollars in cash.

A brand is only as good as its weakest links,” said Wyndham’s President and CEO Geoff Ballotti, “so the focus on quality is critical. But for the owners in the room, if we’re not adding market share, if we’re not growing that top line, then we’re not doing our job.

Scale matters, he said, adding that it’s an "easy bet" that while the five CEOs represent 90 brands this year, this time next year they will be in triple digits.

Patrick Pacious, President and CEO of Choice Hotels International, cautioned that if chains continue to grow brands – perhaps reaching as many as 30 or 40 – “you turn yourself into an OTA and there’s no differentiation for the customer or developer. So there is some saturation point.”

Brands should evolve, he said. “You have to take care of the brand equity for the owners and guests … There’s a way to take your brand and continue to make it relevant.”

Choice bought a brand last month in the extended stay space in the US. With some 240 hotels and cash return for owners, Choice believes it can scale the brand to “triple in size.”

Choice also regards itself as a technology company. “We’ve always looked at the world a little bit differently.”

“We don’t operate hotels,” said Pacious. Asset-light for some two decades, the “personal interaction with the guest is primarily done by our franchisees,” he said.

“Accor is not and never should be a technology company,” said Chairman and CEO Sébastien Bazin. “I’m moving away from it because we’re never going to be good at it because you have vast numbers of new economy digital players who are far better, far faster, more equipped (with) more talent and financial resources.” But, he pointed out, whereas the tech companies know “everything about you, inside out, they’re missing one link, which is the last mile – they’ve never seen you.” “I hope Accor will never be an IT company because it’s just not what I want to do.”

The CEOs of AccorHotels, Choice Hotels International, Hilton. IHG and Wyndham Hotel Group took part in a panel discussion at IHIF in Berlin on March 6, 2018.