Two Cambodian chefs known as the ‘Kimsan twins’ because of their shared family names – Kimsan Sok and Kimsan Pol – grew up in a country which had been torn apart by the violence unleashed by the Khmer Rouge. Add to the mix, that they were trying to make their mark in male-dominated restaurant kitchens, and their journey from life in a village to one of the best restaurants in Cambodia is even more remarkable.

“I knew I wanted to be a cook from my mom. Both our moms were village cooks, this is an important position in Cambodia. They are often asked by the whole village for weddings or ceremonies. They cook for everyone in the village,” said Kimsan Sok.

Today, the twins oversee teams -- as executive chefs at Embassy Restaurant in Siem Reap – for tourists visiting the Angkor Wat temples. On the menu is traditional Khmer cuisine ‘with a twist’.

“When they try our food, we want our customers to taste the genuine Cambodian flavors,” Kimsan Pol told Hospitality Insights.

Gastronomy can help attract customers, because nowadays more and more people want to eat in restaurants with high standards and quality [ingredients]. They are also looking to take better care of themselves and their health. Our guests also want to try something different to what they have at home. 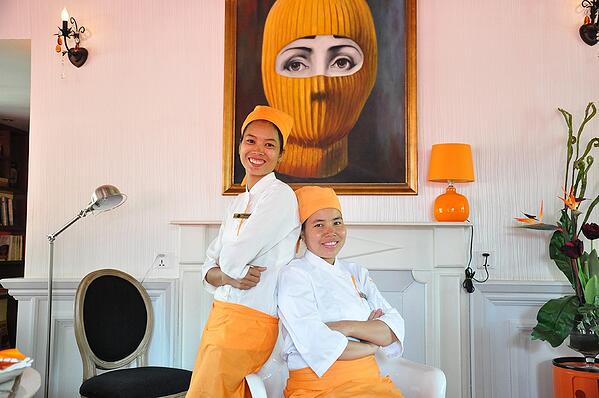 She then gave a concrete example: “In Cambodian cuisine, we use a lot of Prahok, made from fermented fish. It has a very strong taste. We try to adapt the seasoning to our customers but we want them to experience the proper flavor. If it’s too strong or spicy though, we can reduce it a bit.”

Although Cambodian food is generally not as spicy as the food from neighboring Thailand, for example, she added that “you must keep some spiciness, otherwise you may destroy the original flavor of the recipe”.

When people want to travel and discover a new culture, gastronomy plays a big part of it,” Kimsan Pol said. “Street food has a role, but our gastronomy really offers a unique experience. We try to offer [food] that people can’t find anywhere else.

The ‘twins’ had studied at vocational training schools which give students the skills they need to bring themselves out of poverty: Salai Bai Hotel & Restaurant School for Sok and Paul Dubrule Restaurant & Tourism School for Pol. They then traveled extensively to different continents – including a recent visit to Ecole hôteliere de Lausanne in Switzerland where they shared their passion for Khmer cuisine – took part in various competitions and even had guidance from Michelin-starred French Chef Régis Marcon.

According to the UN’s World Tourism Organization (UNWTO) 2nd Gastronomy Tourism report, gastronomy plays an important role in promoting a destination but can also act as a marketing and branding tool to preserve local tradition and diversity, while rewarding authenticity.

Chefs can be ‘interpreters of the territory,’ but the UNWTO added that gastronomy tourism’s first mission is not just about preserving the past, but it’s also about “maintaining authenticity in the future”. But how to stay authentic when a destination is trying to attract guests from another culture, who can have different “culinary habits”?

Adaptation is key for the promotion of gastronomy tourism, but traditional values must be preserved. There is more that can be done in this regard, noted the UNWTO. To develop gastronomy tourism, public-private collaborations represent an important and essential instrument. This can be done through cooperation with private companies, tourism offices, local entities, as well as national bodies.

People seek to experience food in the same way that they seek out other elements of different cultures like art, music and architecture. -Taleb Rifai, UNWTO Secretary-General

According to the UNWTO, “linking gastronomy and tourism provides a platform for the promotion of cultures through their cuisine. This not only assists in destination branding, but also helps to promote sustainable tourism through preserving valuable cultural heritage.” However, war or other major events can make the preservation of authenticity difficult.

Preserving the past against the odds

Cambodia’s recent past of genocide (two million people died under the Khmer Rouge regime) and war didn’t make the task easy for the Kimsans. “Before opening Embassy, we did some research at the national archives because lots of knowledge disappeared during the Khmer Rouge regime, including our Cambodian gastronomy. Thanks to the archives, we had access to forgotten recipes. We also got the chance to be coached by a member of the cooking staff of the former King of Cambodia, King Sihanouk. We learned from him the traditional Cambodian cuisine, a mix between the history of Cambodia and its culture, but framed by some techniques learnt abroad. We try to be modern in our way of cooking, while introducing guests to the traditional and historical dishes of Cambodia.”

While the outlook for gastronomy tourism seems to be bright, the Kimsans surely have a promising future. When asked about their ambitions, their answer could not be more straightforward:

We want to be the female leaders of Cambodian cuisine.

From time to time, they go back to their respective schools to meet the current students and although most of the students are men, they are seen as role models for the women there.

“When we talk about women, power and our success, the female students identify with us. I also share my experiences; I went abroad, I have trained a lot. I manage 13 restaurants and 100 staff members. This is really inspiring for them,” Pol said.