Postcards from the Galapagos Islands: Do the fittest really survive?

When thinking of the Galapagos Islands the first images that we may conjure up are of giant tortoises, marine iguanas, sharks, beautiful tropical beaches, and a laid-back lifestyle where troubles of the outside world are non-existent and one’s daily ‘responsibility’ is to swim with the dolphins. This could have been the case in the past, but not in 2020!

The pandemic impact on the Galapagos Islands 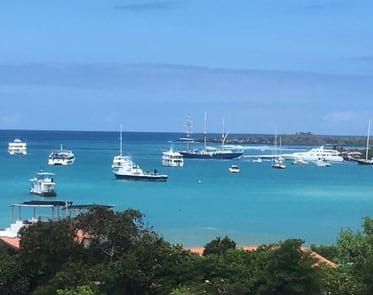 The Galapagos Islands form an archipelago located around 1,000km from continental Ecuador. It is the country’s most important tourism destination and one of the most attractive destinations on the entire American continent, … and possibly on earth. Nevertheless, the pandemic impacted the UNESCO World Heritage Site severely in 2020. The United Nations World Tourism Organisation (2021) announced that international tourist arrivals dropped worldwide by 74% in 2020 compared to 2019 numbers. Not even this remote destination was spared the wrath of the pandemic. Although tourism was low scale with 68,989 tourists in 2000, numbers had grown exponentially to 271,238 in 2019 (Ministerio de Turismo, 2021). In fact, tourism forecasts anticipated a growing mass tourism phenomenon in the Galapagos. One may say that nature finally solved the problem with the pandemic.

According to Dr. Maria-José Barragan, Scientific Director of the Charles Darwin Research Station on the island of Santa Cruz, nature earned a reprieve from tourism pressures during the lockdown (March-July 2020), and animals, such as sea lions, tropical birds, and marine iguanas were ‘wandering around’ in the streets of the archipelago’s three populated settlements. On the other hand, the pandemic also meant that there were fewer scientific studies that monitored the abundant natural surroundings. So, nature recolonized land and sea without human participation. 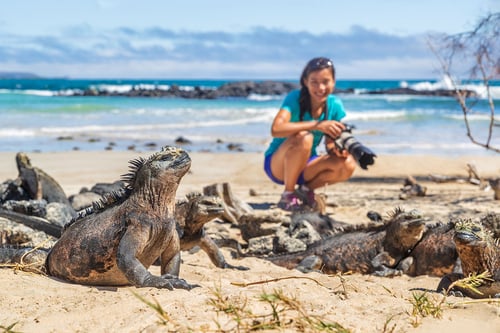 As with many destinations whose economies rely on tourism, the pandemic has ravaged the archipelago’s tourism industry. In 2020, there was a 73.3% year-on-year drop in tourist arrivals and although tourism is back, the numbers had not, as of August 2021, returned to pre-pandemic levels. Since the onset of the crisis in March 2020, nearly 80% of the island's hotels (roughly 280 hotels) have endured financial difficulties and laid off part or all of their hotel staff. Consequently, 78.6% of the hotels laid off completely or partially their hotel staff. This massive downsizing was even supported by the Ecuadorian Government, which established a law, ironically named the 'Humanitarian Law', that liberalized labour contracts to favour short-term and temporary contracts, without any social and health security for employees (El Comercio, 2020). Needless to say this led to harsh labour conditions in the hospitality sector, without any security or possibility to plan for the long term.

The crisis was generated by another phenomenon, which is directly tied to tourism degrowth in the Galapagos Islands. Although the Galapagos Islands are considered an exclusive destination, the average room price has dropped markedly due to plummeting tourist arrivals and poor coordination among local hospitality stakeholders. Most hotels have slashed their rates by 50% or more, which has started to attract tourism segments with lower purchasing power, such as domestic tourists and backpackers. Domestic tourism increased in 2020 by 10% compared to 2019, and the trend seems to be gaining even more momentum in 2021.

Despite the central role of the Galapagos Islands in the country’s tourism industry, the hospitality sector has not received any financial aid from governmental or tourism agencies. This has thrown hospitality stakeholders into disarray, as in addition to the massive layoffs - alongside a lack of working capital for basic operations, maintenance, and, of course, innovations - there has been a quality drop in the services provided by the few hotels that have managed to survive. As hotels struggle to keep their heads above water, sustainability-related investments have struggled to stay afloat, too. This may have long-lasting effects in the tourists’ eyes and could tarnish the National Park’s overall image. 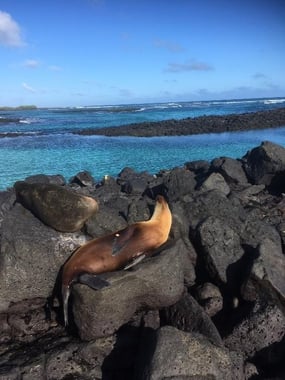 Nonetheless, a promising change in hospitality management due to the pandemic should also be mentioned: there has been a cultural change in favour of medium- and long-term planning in the hospitality sector. Most hospitality stakeholders affirm that the pandemic has taught them to shift from a short-term, 'carpe diem' attitude to preparing for future crises by leveraging emergency funds. In this sense, a major cultural, and economic change has appeared where hotels plan to be more prepared for future crises. Certainly, the well-known psychological theory, the attitude-behaviour gap, may be useful for analysing this ‘cultural shift’ in the medium and long term and we will see how the Galapagos hospitality industry performs in the future.

Despite its prestigious image of being a sustainably managed UNESCO World Heritage Site, the Galapagos Islands were not spared the economic calamity of the pandemic. The hospitality sector has been struggling to regenerate its previous tourism dynamics. Nevertheless, most of the tourism stakeholders on the islands believe that maybe it is time to revitalise the tourism industry and transform it into one that is truly sustainable, across all aspects of the sustainability framework. 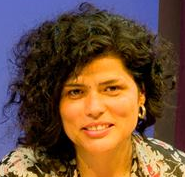 Swiss tourism amid dueling crises: A look behind the numbers

The new Daskara tourism app for a SMART hotel-guest relationship