The Impact of Terror on Europe’s Hotels

How have hotel markets in Europe reacted to terror attacks over the past three years?

Tragically, Europe has endured multiple terrorist attacks in recent years. In the past 12 months alone, we’ve seen a shift in the way terror affects hotel performance, and this article will delve into how several markets reacted following attacks. (All figures are 12-month moving averages, indexed to the month prior to the terror attack unless otherwise stated.)

We’ll start by looking at France, which has endured several attacks over the past three years, most notably in Paris and Nice.


In March 2016, Brussels hotels were already suffering due to the aforementioned atrocities in France. Then terror struck at Brussels Airport and Maalbeek metro station. 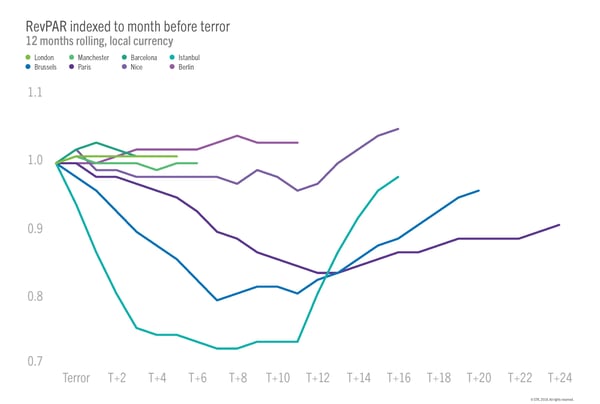 There were five separate terror attacks in Istanbul in 2016, along with the nightclub shooting on the first day of 2017. The city was also the center of a coup d’état attempt in July 2016 and, for the purpose of analysis, performance has been indexed from that point.

Since December 2016, when one of Berlin’s Christmas markets was attacked, London (on two occasions), Manchester, and Barcelona have suffered terrorist atrocities. The impact on hotel performance, however, has been markedly different from those previously seen in Paris, Brussels, Nice and Istanbul.

While it can be argued that the sophistication, or lack thereof, of a terror attack can have a bearing on visits to a city, there does appear to be a shift in traveler attitudes to cities that have been affected by terror. Travelers appear to have become more stoic in the face of terror and have accepted that, sadly, this is a danger that we face in our day-to-day lives, both now and for the foreseeable future.

This article was originally published in STR's Global Hotel Study, a comprehensive overview of the hospitality industry covering over 100 markets worldwide.

STR's Global Hotel Study gives an unprecedented, worldwide view of the hospitality industry. With detailed insights for more than 100 global markets, the report explores the highs, the lows, and the factors tipping the scale in each direction. Beyond the numbers, the greatest value of this report is that it ties together on-the-ground industry knowledge from STR experts located across 15 countries.

After the time of publishing this article, thestudy has been removed from the STR website.

Director of Business Development at STR

The impact of cleaning protocols on the hospitality industry