Bread insights according to Thomas Marie

Few can argue the importance of this 30,000 year old foodstuff that is the most widely-consumed comestible product in the world. Despite the increase in gluten-intolerance and low-carb diets, bread - in all its varied guises - is still top of the shopping list and continues to be considered “the staff of life”.

Hence, no guesses for what was the no.1 home activity during the recent COVID-19 confinement period. Apparently, kneading bread is better than Valium when it comes to reducing stress and anxiety, with supermarkets reporting shortages of flour and yeast on their shelves in the peak lockdown months. Knowing how to bake your own bread is a supreme life skill that brings with it meditative contemplation and long-term gratification. At EHL, we are thrilled to share some insider top tips from our award-winning head baker and lecturer, Thomas Marie.

Marie knew he wanted to earn his bread baking bread when he was 6 years old. Growing up in France, (Vesoul, Franche Comté), his pastry-chef father had him helping out in the family business, resulting in a diploma at the Institut National de la Boulangerie Pâtisserie in Rouan and then the title of ‘Meilleur Ouvrier de France’ (MOF) in bread-making at the age of 26.

In 2011, EHL gave Marie carte blanche to set up the on-site school bakery and teaching program that ensures no student finishes their hospitality degree without knowing what ‘la grigne’ means and how to perfect it. With his alarm set at 2.45 am, Thomas turns on the EHL ovens at 4 am and starts to bake all the bread for the school food stations and the Michelin star training restaurant, Le Berceau des Sens. Students arrive at the luxury time of 6 am to continue baking throughout the morning to Marie’s exacting high standards. 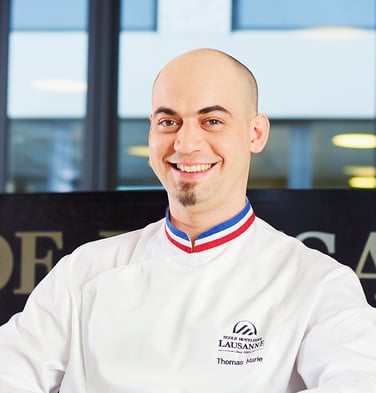 What makes the perfect loaf of bread according to Marie?

Wheat is best, claims Marie, simply because gluten (a protein contained within) is what creates those tiny air pockets in the dough that give bread that fluffy, moist texture. Rye flour, for example, has less gluten and comes out more dense, slightly drier and less stretchy. In order to obtain the right consistency when kneading, it is only with wheat flour that one can achieve “the gluten windowpane”: that elastic texture where the dough can be pulled apart thin enough to see through it.

Different flours demand different kneading techniques. Rye and whole wheat flours need a lot of warm water added to help break down the little gluten they contain and not much kneading time, since they can never be as supple as wheat flour. Wheat flour requires a little cold water to be added and up to 30 mins kneading time in some cases to achieve the right stickiness and extensibility.

If bread-making is a science, then yeast is its main chemical component. Yeast is made of a single-celled organism called saccharomyces cerevisiae, an organism that multiplies rapidly when fed sugar and gluten in a moist environment. This is what makes the dough rise. It is mostly sold as dried dormant granules, known as active, instant, or rapid-rise yeast. Dried yeast has a long shelf life and can be stored at room temperature.

Fresh yeast, sometimes called cake yeast or compressed yeast, is a block of fresh yeast cells that contains about 70% moisture and is commonly used by baking professionals. It’s pale beige in color, soft and crumbly with a stronger yeasty smell than dried. It has a 2-week shelf life and must be refrigerated. The secret is not to use too much yeast in general and to use fresh when possible. 10 grams of fresh yeast to every 1 kilogram of flour, (4 grams if using dried), advises Marie. 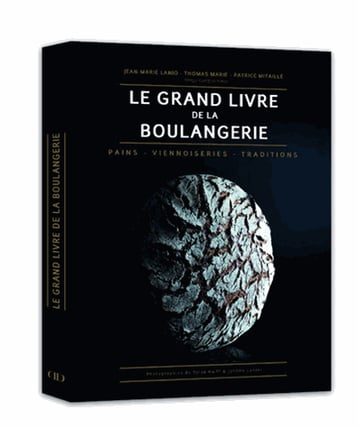 Regular bread is made using yeast that reacts with gluten making the dough rise. Sourdough bread, on the other hand, is made with a "starter" - a combination of yeast and bacteria growing inside a paste made of flour and water. These bacteria produce lactic acid which ferments the dough, giving the bread its characteristic slightly acidic taste.

The lactic acid in sourdough bread results in a lower glycemic bread than one made from regular yeast. Compared to the regular loaf, sourdough bread is converted to sugar more slowly, so it's considered a ‘healthier’ option, (although it can’t be used for everything, e.g. “a sourdough croissant just doesn't work!” says Marie, the Frenchman).

Oven within an oven

The oven is the most important part of the baking process. But whether vapor or convection, the next best thing to having an amazing oven is simply a cast-iron pot. Many of you might be scratching your heads at this stage, imaging what a Creuset-style stewing pot has got to do with bread baking. Well, it’s all about heat conduction - which is exactly what a loaf needs for optimum results. Pre-heat your oven and cast-iron pot at 220 degrees for a minimum of 30 minutes. Then score the top of your leavened dough and place inside the pot, but before you close the lid – splash a few drops of water onto the inside of the lid – and then close it down, ensuring that those few water droplets create a steam environment. Et voilà, an oven within an oven that conducts the heat evenly and efficiently.

Machine Vs by hand

“No pain, no gain. It’s important to do everything by hand for both optimum results and the sense of gratification that accompanies every loaf. A bread-making machine can do everything for you, but not very well; it’s a bit like cheating in a test. Bread from a machine tends to be more compact, and hence, lasts a bit longer – but this is really the only advantage”, states Marie with utter conviction.

Knowing the A to Z of bread vocabulary is a great way to really master the art of making your own loaf. Here is Marie's guide to all those tricky terms that may have previously put you off getting your hands messy.

Never embark on the process in a hurry. There are at least 12 steps involved, skipping any of them will sabotage the success of your daily bread.