Vegan cuisine was the fastest growing culinary trend since a couple years ago already and has been among the top food trends since then. Its sales are expected to increase to over $30 billion by 2026.

These numbers aren't only a result of the increase in vegans and vegetarians. According to The NPD Group, about 90% of vegan food consumers are meat-eaters. This shows that the world is embracing compassionate eating and it's not just for animal welfare. It is also strongly supported by business trends in the restaurant world, where more and more chefs and restaurant owners across the globe are choosing to not only expand to veganism with diversified menus, but also make the bold jump to completely forgo traditional proteins and go the plant-based route. One recent and striking example being one of New York City's finest establishment, Eleven Madison Park.

A Vegan Menu: Benefits for Restaurants

The Hiltl restaurant in Zurich, Switzerland was created in 1898 and is the oldest vegetarian restaurant in the world. After over 100 years, with all the health, financial, and other benefits of plant-based foods, you would be justified to think they now form at least 20% of restaurants.

However, even with over 79 million vegans in the world, the growth has been quite slow. Only 2.5% and 11.5% of Swiss restaurants offer vegan and vegetarian specialties respectively (more than 3 dishes on the menu). Is it lack of demand or lack of knowledge?

Well, if the fact that The Vegan Society had over 82% of products registered with their trademark over the last five years is anything to go by, it is mostly due to lack of knowledge. There wasn't a huge market for such restaurants because people didn't know how beneficial vegan foods are.

But technology has changed this over the last couple of years by placing the information within reach. The more people learn, the more they want to switch. Also, there has been a huge leap in technology so vital nutrients can be supplemented or easily derived from plants, which wasn't available in the past. By adapting to vegan foods, restaurants can enjoy the following benefits:

Although it sounds counterintuitive due to the higher price of plant proteins and the small number of vegans, it actually saves money to restaurant owners. And this study by Forbes shows sales could increase by as much as 1000%.

Besides, the prices of animal products are expected to keep rising so the more of them you sell, the more they cut into your sales.

By serving vegan dishes, restaurants can appeal to a broader market. As veganism is rising in popularity, soon, there will be at least one vegan in a group of friends. When deciding where to go out to eat as a group, they will definitely look for restaurants that accommodate vegans. If they don't, restaurants miss out on potential revenue.

Most of the ingredients and foods used to prepare vegan meals can be sourced locally. This allows chefs to directly contribute to helping their local community through sustainable employment.

Also, locally produced food is fresher, of higher quality, cheaper, cares for the environment, and it is possible to monitor the growth to ensure it is organic and up to standard.

By sourcing ingredients and groceries locally to create vegan dishes, chef will stop relying on weak or complex supply chains.

As mentioned above, not many restaurants cater to vegan needs so there isn't much competition. If restaurants add vegan dishes to their menus and serve them well, vegan customers will always come back to them.

Is vegan cuisine a fad or a full revolution from a consumer standpoint?

Why are more people choosing a vegan diet? More Gen Z and Millennials have given up meat compared to older generations. As they age and teach the same to their children, this switch to vegan foods will turn into a full revolution. Vegan foods are in fact not just for "environmental nerds". They have several benefits that make them a great choice even for non-vegans.

Some of them include:

When followed correctly, a vegan diet can be highly nutritious and reduce various risks associated with harmful animal fats. Some of the health benefits of vegan cuisine include:

According to a 2019 study, a low intake of animal foods and a higher intake of plant-based foods reduce the risk of heart disease and death in adults. Also, animal foods contain saturated fats that raise cholesterol. These fats, according to the American Health Association, increase the chance of stroke and heart diseases.

Because plant-based foods have fewer calories than animal foods, they are great for losing and keeping your weight within a safe range, and avoiding heart diseases.

According to WHO, a third of all cancers are caused by preventable factors. One of them is your diet.

Plant foods are much higher than animal foods in vitamins, fibers, and phytochemicals. Phytochemicals are compounds in plants that prevent cancers. According to a 2017 review, adhering to a vegan diet can reduce your risk of cancer by up to a whopping 15%.

According to the International Agency for Research on Cancer, red and processed meat are carcinogenic.

Vegan diets are more effective at weight loss than omnivorous and vegetarian diets. Animal foods have higher calories than plant-based foods, making them less effective at losing weight. Observational studies report vegans to tend to be slimmer and have lower BMIs than non-vegans.

However, to successively lose weight with a plant-based diet, it shouldn't contain lots of processed or high-fat foods.

Vegan foods reduce the risk of type 2 diabetes by lowering blood sugar, according to a 2019 review. Additionally, diabetics who switch to a vegan diet reduce the risk of poor kidney function, and it relieves symptoms of polyneuropathy.

Vegan Diet Better for the Environment

People who care about the environment are switching to vegan foods due to the following reasons:

Animals have the ability to suffer. They can feel physical and - some may argue - psychological pain. Breeding, caging and, slaughtering them for food and other products cause them suffering.

It makes little sense how some people love animals so much that they keep them as pets but are indifferent to others to the extent of killing and eating them. If people in the whole world were to be killed at the same rate as animals, we would last only about a month.

Farmed livestock, according to the Food and Agriculture Organization (FAO) account for 14.5% of all man-made emissions. To put that into perspective, it is more than what is emitted by all the cars, trains, ships and, aircraft in the world! A report from UNEP says plant foods require fewer resources and cause less emissions than animal foods.

According to a 2016 report, if we all went vegan and ended these emissions, food-related emissions will be down 70% by 2050.

Animal foods require lots of energy during their long production process to get them ready for human consumption. One pound of beef requires 31.5 kilowatt-hours of energy. On the other hand, plant-based sources of energy don't require lots of processing so they don't use too much energy. By ditching animal foods, we can save on the much-needed energy.

By avoiding animal foods, we can save water and conserve its supply for other generations.

Animal foods have to be shipped. From the farm to the slaughterhouse and from the slaughterhouse to the processing company or to your plate. This results in high transportation costs and increases the carbon footprint caused by car emissions.

Plant-based foods are mostly sourced locally to increase their shelf-lives. If you want and have the space, you can even grow your own and save on transportation costs and reduce global warming.

The admirable reasons for eating vegan, saving the planet, and improving the welfare of animals, are the most common. However, there is one benefit that most people who have never tried to switch to a vegan diet have no idea about: saving time and money.

This may sound far from the truth because it is well known that dairy substitutes and plant-based meats come at a premium price. However, these pricey alternatives account for only 3.7% of the yearly plant-based diet.

What's more, the rising cost of animal foods due to diminishing supply makes the overall cost of vegan and vegetarian diets less than that of animal diets. In fact, vegans save $23 per week compared to non-vegans.

A study conducted by the UK-based organization Veganuary, found that vegans spend less on groceries and a third of the time used by non-vegans to prepare food. This is the first of its kind, as most studies on vegans focus on the nutritional, ethical, and environmental benefits. 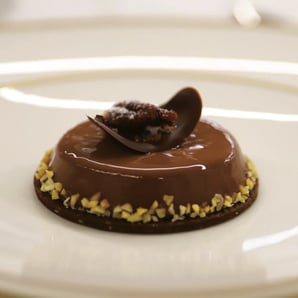 EHL chefs have put together some vegan recipes that will be revealed in the coming months.

Here is a delicious vegan dessert, vegan chocolate tart that will reconcile you with vegan.

By earning our Swiss Professional Degree you not only have the leading hotel management education, you can also deepen your Culinary Arts knowledge at the same time. Learn more and download the brochure here.