Unlocking the Innovation Potential of Teams 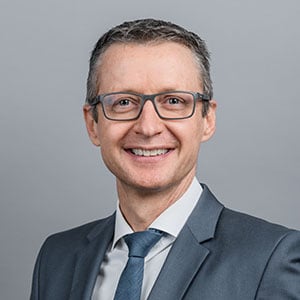 ‘What makes some teams more innovative than others?’

This is an increasingly important question as hotel companies feel the need to differentiate due to increasing competitive pressure. As evidence of the reinvention effort taking place today in hospitality, my institution – the Ecole hôtelière de Lausanne – conducts about 100 innovation projects each year for all types of organizations and entrepreneurs active in the sector. I recently studied teams of soon-to-be graduates involved in the development of such projects to understand what could explain differences in their ability to innovate.

Innovation Is About Transcending Contradictions.

Innovation is tricky. It wants to create the new while preserving some of the old; it requires the development of new capabilities while relying on the exploitation of existing ones; it demands boundless creativity while minding operational constraints.

The old way of dealing with such paradoxes was through trade-offs and compromises. Today, the demands placed on organizations and their people are more varied than ever. And every stakeholder – think owners, operators, brands, guests – expects their demands to be met. The trade-off mindset is no longer sustainable and must transform itself into a paradox mindset as the simplicity of the ‘either/or’ is replaced by the expectations of the ‘both/and.’ In short, embracing contradictions must become the new norm.

Do You Have a Paradox Mindset?

People able to embrace contradictions are said to have a paradox mindset.

To find out whether you belong to the club, simply consider whether the following statements are an accurate description of the way you typically feel:

Tensions between ideas energize me.

I feel excited when I realize that two opposites can be true.

I am comfortable dealing with conflicting demands at the same time.

To begin answering this question, I followed 42 teams of hospitality students in the last year of their Bachelor program at the Ecole hôtelière de Lausanne. These teams were mandated by hospitality companies to work on innovative projects such as the development of:

Over the course of their projects, I collected information to profile these teams in terms of the paradox mindset of their members and to measure the extent to which these projects required them to achieve conflicting objectives. Upon completion of their projects, academics and professionals assessed the innovativeness of the teams’ recommendations.

Because the ability to think paradoxically sounds like a good thing, one might have expected teams whose members are all paradoxical thinkers to be the most innovative. This stands to reason since paradoxical thinkers should be more successful at addressing and reconciling contradictory demands such as developing a ground-breaking F&B concept that remains operationally viable; or expanding a hotel’s offering while remaining true to its brand.

However, the results showed something very different.

The teams composed mostly of paradoxical thinkers were no more innovative than those with few or no paradoxical thinkers. Importantly, the teams that outperformed them both had an equal split of members that scored very high and very low on paradox mindset. How can this be? 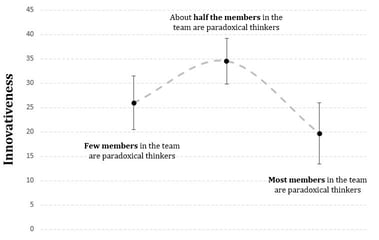 Figure 1: There are decreasing returns to adding more paradoxical thinkers.

There is now extensive research supporting the view that one of the key factors that explain high-performing teams is ‘cognitive diversity’.

Simply put, a cognitive style is a way of approaching and solving problems. Our cognitive style is influenced by education, cultural background, experience, etc., and teams composed of members with different cognitive styles have been shown to outperform more homogeneous teams on a number of performance criteria.

Paradoxes Can Be Both Good And Bad.

An interesting question is whether tensions that come from the pursuit of conflicting objectives are good or bad for innovation.

It turns out that paradoxical tensions are a double-edged sword. While they can foster greater creativity and innovativeness, they can also lead to anxiety and decision paralysis. Most teams that I investigated tended to underperform when projects were fraught with tensions and members were expected to reconcile contradictory demands.

The only teams that thrived and became more innovative as a result of high tensions were those that were very diverse in terms of paradoxical thinking abilities. These teams seemed uniquely able to leverage the hidden potential of tensions.

Furthermore, the difference in the innovativeness of their outputs was not trivial. In projects full of conflicting objectives, diverse teams were twice as innovative as homogeneous ones. These two observations illustrate the dual nature of paradoxical tensions; sometimes hurting, sometimes enhancing, innovation outcomes. 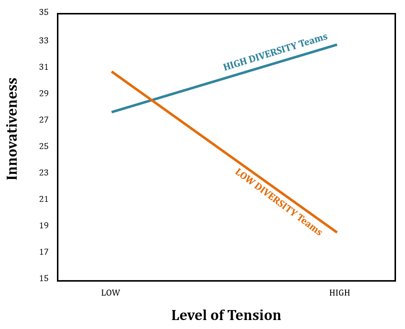 Figure 2: Diverse teams are the only ones who can leverage the innovative potential of contradictions

Taken together, these insights about team composition and paradoxical tensions have important implications for hospitality managers.

First, if you have the opportunity to create your innovation teams from scratch, care should be taken in picking members who think and approach problems differently. In particular, if the projects are complex and require the team to fulfill conflicting demands, then you should mix people with a propensity to accept and embrace tensions with those who tend to dislike and avoid them.

Second, if you do not have the flexibility to create your own teams – perhaps because they are already in place or the pool of people you can choose from is limited – then you should be mindful about the types of projects you assign to these teams. As a general rule, teams who are homogeneous in terms of paradox mindset should be assigned to projects that have clear and consistent goals and objectives, since such projects are unlikely to create high levels of tension. Conversely, you should reserve complex and ambiguous projects for your more cognitively diverse teams. 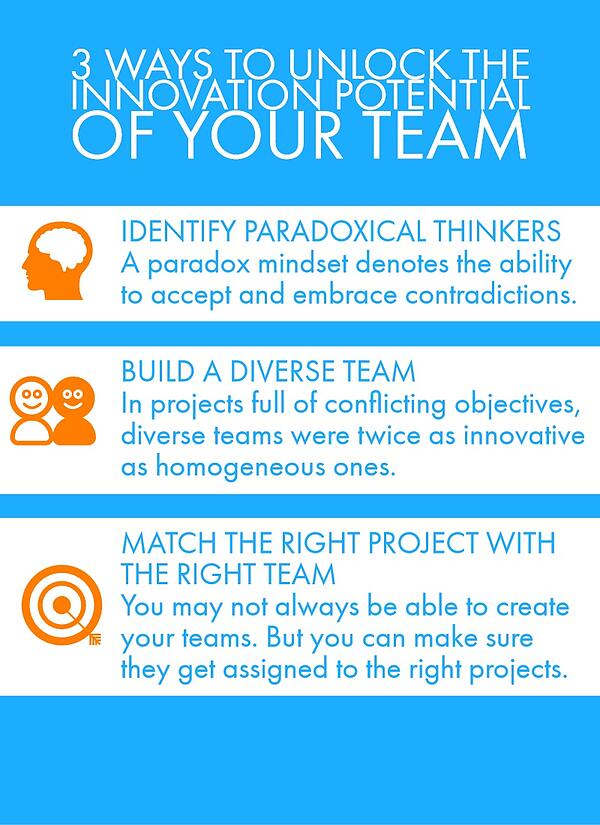 To summarize, all organizations, as well as most projects, require the simultaneous pursuit of conflicting objectives, as illustrated by the all too familiar demands: ‘Let’s be efficient, but let’s be flexible.’, ‘Let’s maximize profits in the short term, but let’s be sustainable in the long term.’, ‘Let’s empower individuals, but let’s emphasize team outcomes.’ Achieving such objectives in tandem creates paradoxical tensions for the business units, teams, or individuals concerned.

While these tensions may lead to synergistic outcomes, they may also frustrate and impede progress.

The question of the effective management of paradoxical tensions, therefore, is an important one. This article suggests two ways of dealing with this challenge.

The first is through the creation of innovation teams whose members differ in terms of paradox mindset.

The second is through the allocation of the right projects to the right teams. The proper use of these two levers could significantly improve how innovative your organization and its people end up being.