Milan received a hard knock earlier on this year with a very long and strict lockdown that affected all lives and businesses. Tiziana and Basilio Santoro had been running an authentic and popular Sicilian food truck ('BEDDA') in Milan for the past 5 years, specializing in the island’s particular brand of tasty and unforgettable street food, when COVID-19 struck and momentarily shut down all operations. Ironically, they had just branched out into an elaborate new location that was to serve as their headquarters and fixed selling hub. Basilio, a true siciliano, ex-radio producer, DJ and professional raconteur, describes how putting the sharing of human experience at the center of their service and diversifying their offer has ultimately saved the BEDDA business from potential ruin.

1. How did the BEDDA food truck idea come about?

It all started with the Italian financial crisis of 2011 where many people their lost their jobs, my wife and myself included. We were forced to take life into our own hands and start over. It took a while. Whilst taking an ‘enforced sabbatical’ to understand what to do, we found ourselves walking through Portobello Road market in London where we saw the typical Piaggio ‘Ape’ (wasp) streetcar transformed into a food truck. The burly Italian guy inside was preparing a sandwich for a customer. At that moment we looked at each other and thought: "Wouldn’t it be nice to have our own truck, make Sicilian street food in Milan and run our own thing?". A few years later we had our own food truck called BEDDA (bella/beautiful in Sicilian dialect) and we were dishing up the best in Sicilian street food for the busy Milanesi. 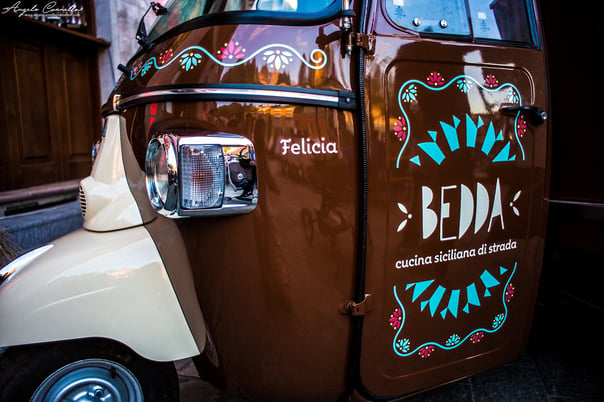 2. What is the basis of your Sicilian street food menu?

Our best seller is 'pane cunzatu' (seasoned bread), the typical poor man’s meal in traditional Sicilian cuisine. It’s also called “bread of misery” because, lacking any more appetizing ingredients, poor people used to enrich it with spices and cheap seasonings that were easily accessible, like herbs, olive oil and garlic. Only the luckiest could afford the luxury of rubbing a piece of sardine on the bread to make it tastier and more nutritious. The recipe has evolved over time with the addition of more sophisticated ingredients, for example in the Eolian Islands recipe they use capers, basil, garlic, mozzarella, cherry tomatoes, dried tomato, green olives and white wine vinegar. In all cases, the bread is used as a base and is heated for a few minutes in the oven before being seasoned. We normally use caponata as our main stuffing, (the Sicilian version of ratatouille enhanced by herbs, capers and olives). It must be said that Sicilian food has a magical effect on many people, it’s that special hybrid of flavors that represent southern Italy with a hint of north Africa – truly unique. 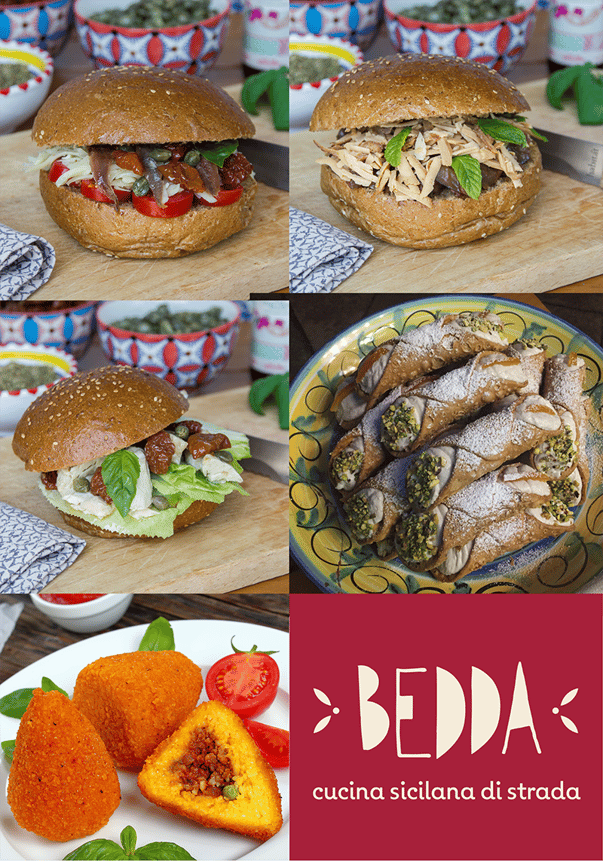 3. How did your collaboration with Eataly affect your profile and returns?

Again, the encounter came about quite by chance. For our very first outing with our BEDDA food truck in July 2015, we decided to attend one of Eataly’s street food events and we parked right in front of their Milan store. Our project was greatly appreciated by the Eataly founder, Oscar Farinetti, who offered us a BEDDA corner inside his shop for the winter from December to February. He liked what we did and how we did it: genuine food made with love and authentic ingredients, accompanied by a friendly, human touch. Very much in line with his own philosophy.

This was an amazing opportunity for us who were just starting out, first of all because there are normally no street food opportunities in winter, and secondly because it got us known to a wider audience. This meant good earnings during what is usually the driest period of the year for the street food business. Years later, we continue to collaborate with Eataly for short periods at their points of sale in Bologna, Trieste, Turin, Piacenza, Rome and Munich.

4. When did you realize it was time to diversify your business?

We understood this two years ago for various reasons. One was due to our customers’ incessant questioning: "Do you have a shop or eatery where we can come and eat your food?". After tasting our Sicilian specialities, many people wanted to know if we had a fixed headquarters where they could find our food on a regular basis. We had very quickly amassed a solid fan base that seemed loyal towards our products and ready to follow us in our expansion towards a bigger set up.

Another reason was because street food events started to pop up everywhere and the market began to get saturated. They say that when the quantity increases, the quality decreases. The atmosphere that reigned in the first two years of our activity was no longer there. The real vintage food truck gems, like the Piaggio Ape, Lander caravan, T1 and T2 Volkswagen camper van, gave way to large nondescript vehicles used by the various bland sandwich makers. The exciting, regional street food menus got replaced by hamburgers, hot dogs, French fries and the like. Last but not least, the weather changed. The 2019 weather in northern Italy saw a spring and autumn raged by torrential rains with an explosion of great summer heat in between. Turnover fell by more than 50%. 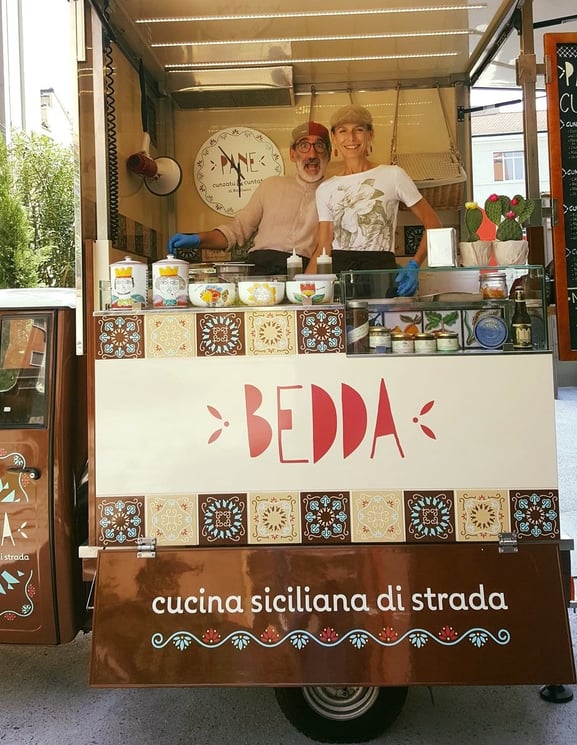 5. And so, BEDDA Casa was born

In these conditions, plan B was urgently needed. We thought, after our BEDDA food truck, why not a ​​BEDDA Casa? Not the usual Sicilian restaurant or sandwich shop that are already so numerous in Milan, but a location that represented our life story, our ‘Bedda storia’. A location where Basilio, the entertaining Sicilian raconteur, can tell great stories while cooking up a feast. And Tiziana, the talented architect, can create a bright, welcoming atmosphere with her designs, as well as stuff cannoli and make amazing caponata. We have always wanted to offer more than just a ‘food’ service, but rather an ‘experience’ that touches all the senses.

After careful research, we found the ideal loft space of about 150m2, plus a large terrace of 40m2, in an area of ​​Milan undergoing major redevelopment and revitalization known as the ‘NoLo’ (the north Loreto district). We wanted every corner of BEDDA Casa to tell of our love for Sicily. Its bright light is narrated by the large windows that illuminate the 150 square meters, the large blue wall represents the sea with its various depths. The hand-painted De Simone ceramics testify that Sicily is a land of colors. Oleander, olive, mandarin, jasmine and Mediterranean herbs bring us back to the scents of the beautiful island. The furnishings bought in various Sicilian 2nd hand markets tell of lived lives. 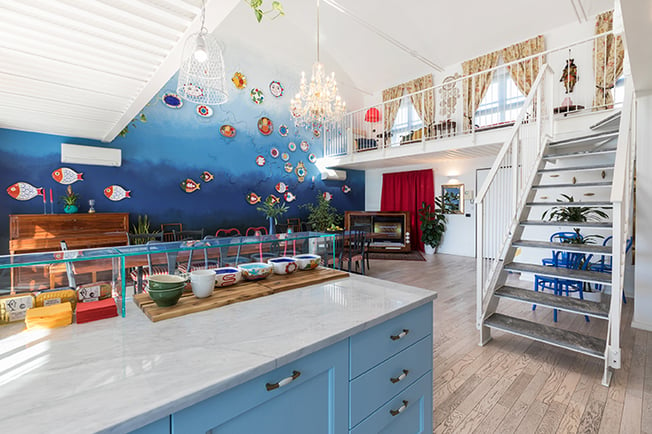 Establishing headquarters at BEDDA Casa meant that we could also diversify our food offer. From just quick and easy street food, we now propose elaborate Sicilian-based menus for private parties, events and takeaways. BEDDA has since become a brand with clear image, marketing strategy and a myriad of services offered: BEDDA Takeaway Bags that cater to a Single, Love or Family context; a rich and varied aperitif menu; an assortment of Sicilian wines and beers; private parties with a 3 course tailor-made meal. Not to mention the extra professional services linked to our previous lives: interior design and decoration (by Tiziana) and DJing & story-telling (by Basilio).

Compared to being on the road in a food truck, having a fixed hub means a more intimate relationship with the customer. There’s a different process involved when you are accompanying your customer through the planning stages of a private party or catering event.

The ability to diversify our offer has been crucial to our survival, we would not be still here today had we just stuck to the food truck, despite the hardship of lockdown.

6. How did your business survive the COVID-19 lockdown? Tips for other small businesses?

Obviously, during the lockdown, our activities with both the BEDDA food truck and casa were put on hold. We survived thanks to our bank which believed in us and supported us at a time when revenue suddenly dropped to zero. Like everyone, we accepted all the government support initiatives for small businesses.

We took advantage of the time available to understand how to face the future. We came to the conclusion that we might actually have the right formula for coming out the crisis: BEDDA food truck gives us the opportunity to work outdoors, whilst BEDDA Casa, built for a close-knit family atmosphere indoors and blessed with a huge outdoor terrace, could be an excellent answer to the future where social gatherings will have to be intimate and very well thought out. Our motto is now "The less we are the better we are". Ironically, our BEDDA Casa headquarters encompass the necessary set up to comply with the current COVID health and hygiene measures.

The advice we can give to small businesses is to focus on quality, safety and sustainability. Diversify your offer as much as possible according to your strengths and customer demand. Find new concepts for marketing and communication. For example, we are now moving from ‘Street Food’ to ‘Sentimental Food’, i.e. food that is made with love and delivers emotions.

For us, the sharing of beauty, quality, sustainability and safety is what underpins everything we do – even before a profit is made. We are ultimately driven by wanting to create a real relationship with our customers, using our BEDDA food truck and casa as a place where human experiences are created, tasted and shared. At BEDDA Casa, mobile phones are banned, but stories and dreams are welcome.

Why there is hope amid the despair for the Hospitality Industry

The relationship between the stringency of COVID lockdown measures and GDP