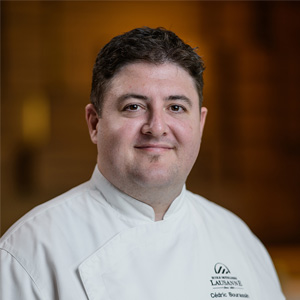 From starred restaurant tables to embassies, head chef of the Berceau des Sens, Cédric Bourassin, has acquired a unique expertise that he shares with students and clients at our Michelin Star gastronomic restaurant.

Today we delight in one of Cedric's recipes from the Gault & Millau website:

How to elevate the humble pea?

What is round, green that rises and falls? A pea in a pot of boiling water! That's how Cédric Bourassin cooks these famous green legumes: very quickly and with a little salt. Because yes, even if not everyone appreciates them right away, the chef at Berceau des Sens (EHL's Michelin starred training restaurant), knows how to make them sexy.

In his eyes, they "represent good times in a wonderful way! Their bright color is unique, they bring back good memories, and it feels great to shell them."

How Cédric Bourassin came to develop the Pea Sorbet recipe

After returning from Japan in 2015, where he ran the kitchen of a three-starred restaurant for four years, Cédric Bourassin learned new ways to work with peas, like this bright green sorbet.

In the same vein, he imagined a dessert combining pea sorbet, crumble, red bell pepper and olive oil foam. Are you lost for words? Then stick to his easy steaming technique: moisten to the top, add thyme, garlic and butter, and cook until evaporation.

"Remember to remove the outer layer of skin from the fresh peas, it might be tedious but it's super important, the puree will be much thinner this way."

Tips for cooking with peas!

Cédric Bourassin and his EHL student brigade have launched  a pea purée on a parmesan shortbread as a new idea at Le Berceau des Sens. This seasonal appetizer is all the rage! Pea pods are centrifuged with other fruit and vegetables to make detox juices, while the chef carefully grows them to use the leaves. "Actually, the pea is much more attractive than it looks!" concludes Cédric Bourassin, half amused and half delighted by this eccentric ingredient.