Leadership skills: 12 cognitive biases to be mindful of when decision-making

Decision-making under pressure is a core leadership skill needed in life, especially in the hospitality industry. The human brain is very powerful but also comes with its limitations. Indeed, it can’t handle the tremendous amount of data coming in every second… Naturally, in order to simplify information processing, we take short-cuts which are called heuristic or cognitive biases. A cognitive bias is a systematic pattern of deviation from norm or rationality in judgment. Individuals create their own “subjective reality” from their perception of things (The Handbook of Evolutionary Psychology). As a result, their behavior becomes dictated by their construction of reality, instead of facts.

Humans like to twist the reality in a way that goes along with their own beliefs. Consequently, we often tend to speak with confidence about things we don’t fully understand. As much as we want to be right, rational and logical, we are constantly under the influence of cognitive biases. Almost everything in our lives is a bias. And it’s not necessarily a bad thing. In some cases, biases make our thinking faster and more efficient, as we don’t stop to consider all the available information. However, it’s important to be aware of these biases and try to mitigate them as much as possible to be in the known.

The more we become aware of biases, the closer we get to reality — Peter Baumann

Here’s a list of cognitive biases that will hopefully help make your decisions and judgement more accurate and relevant in your place of work or study.

The confirmation bias is the tendency to pay more attention to information that confirms our existing beliefs. Through this bias, people tend to favor information that reinforces the things they already think or believe, avoiding evidence of the contrary (Verywell mind). Focusing on existing opinions makes it easier as it helps reduce the amount of resources we need to make decisions. Furthermore, it boosts self-esteem as it makes people feel like their own beliefs are accurate.

The anchoring bias is related to the tendency of being overly influenced by the first piece of information obtained, no matter how reliable it is, and using it as the baseline for comparison (Minnesota State). Instead of being objective, we tend to base our reasoning on newer information and set inaccurate reference points.

It is the tendency of an individual to acquire a particular style, behaviour or attitude because everyone else is doing it. As more people come to believe in something, others also “hop on the bandwagon” regardless of the underlying evidence (Identifying the bandwagon effect in two-round elections). Other names for this are “herd mentality” or “group thinking.” In a corporate context, if one person doesn’t feel like talking because it goes against the majority, the whole group is likely to miss out on a great idea.

A Halo effect occurs when our positive impression of people, brands or products in one area positively affect our feelings in another area, even though they aren’t related. It describes the tendency of people to be influenced by their previous judgments of performance and personality (The Decision Lab). It also relates to the belief that “what is beautiful is also good”.

An availability bias describes the tendency of people to rely on information that comes to mind quickly and easily (Practical Psychology). It illustrates how isolated memorable moments have a disproportionate influence on decisions we make.

The ostrich effect is a cognitive bias that causes people to avoid information they perceive as potentially unpleasant. Instead of dealing with a situation, some people prefer to bury their heads in the sand, like ostriches, thinking it will go away. This often makes things worse, as we inflict ourselves costs we might not have had to pay if we had faced the situation in the first place (The Decision Lab). 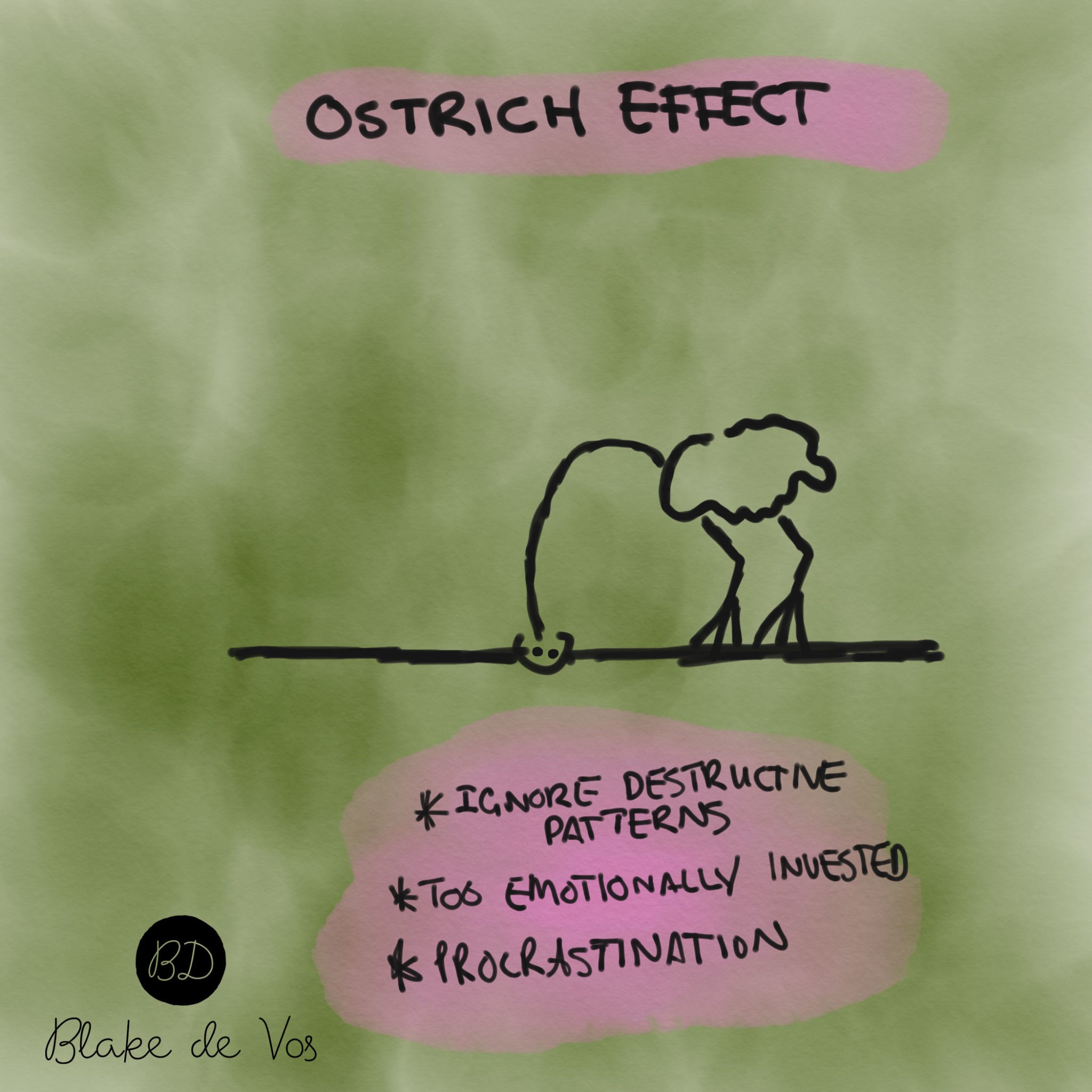 Recent events are easier to remember, and are often weighed more heavily than past events or potential future events. The recency effect is a component of the serial position effect which describes how our memory is affected by the position of information in a sequence or a list. It implies that we best remember the first and last items in a series and find it harder to remember the middle items (The Decision lab).

It is the tendency to remember our choices as better than they actually were, as we tend to over-focus on the benefits of options we chose and on the downsides of options we didn’t chose (Convertize). This helps us feel better about the decisions we made. Why would someone point out that they made a bad decision ?

The fundamental attribution error describes how, when making judgments about people’s behavior, we overemphasize personality traits and downplay situational factors (The Decision Lab). In other words, we assume that no matter the context, a person’s actions usually reflect who they are as an individual. This often leads to unfair and incorrect judgements about people as we aren’t taking into consideration all possible reasons for their behavior.

The outcome bias is the tendency to judge the quality of a decision we made primarily based on how things turned out rather than analyzing factors that led to the decision (Alleydog). Having a look at the outcomes of a decision completely makes sense. However, placing more weight on the outcome rather than on the process and the context that led us to it is foolish.

It refers to the tendency we have to inaccurately link an action to an effect, seeing an association between two variables (events, actions, ideas…) when there’s in fact no correlation (The Decision Lab). We like to base many of our decisions on the relationships between various phenomena. We notice that certain events consistently happen at the same time or after others, leading us to conclude they are related while this isn’t necessarily true.

It’s the tendency to believe you know something while in fact, you don’t. A Dunning Kruger effect occurs when a person’s lack of knowledge and skills in a certain area cause them to overestimate their own competence (The Decision Lab). Logically, low ability people don’t necessarily have the skills to assess their incompetence. Contrastingly, the most knowledgeable people usually have intellectual humility, meaning they’re able to recognize the things they believe in might be wrong. They have strong critical thinking. This notably refers to famous Albert Einstein quote “The more I learn, the more I realize how much I don’t know”.

There are many leadership skills required in the workplace but practising mindfulness can considerably help you reduce biases in your life and increase your ability as a desicive leader. So the next time you have to make an important decision, try to be intentional in questioning your own beliefs and being critical. As a result, your judgement and thoughts are likely to become more accurate and relevant, bringing you closer to reality.

This article was previously published on Medium.

A Singaporean student’s journey to EHL in Switzerland