French master chef Joël Robuchon died in early August at the age of 73. EHL Executive Chef Philippe Gobet, who worked with Robuchon in the 80s and 90s, shared his memories with Hospitality Insights in a recent interview.

Just 20 years old, Philippe Gobet traveled to Paris on a TGV for the first time in the early 80s to join Joël Robuchon at his restaurant Jamin in the rue de Longchamp. It would be the start of a collaboration which lasted a little over 13 years.

“A friend of Joël's advised me to go to work in Paris because they had explained to me that if I wanted to become a great chef, I had to go to Paris. That's how I came to [work with] Joël Robuchon.” 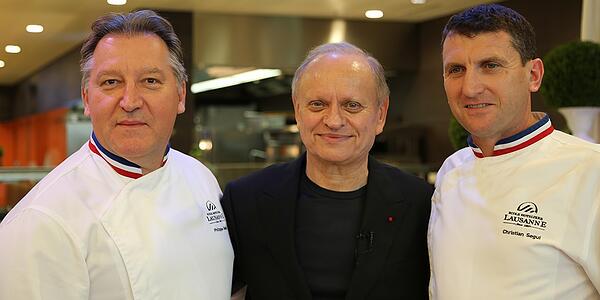 Robuchon was in his late 30s at the time and was already making a name for himself. He had managed a team of 90 cooks at the Concorde Lafayette hotel at the age of 29. Then he had gone on to gain two Michelin stars at the hotel Nikko before opening the Jamin in 1981. As his biography on the website ‘Le Monde de Joël Robuchon’ points out, the restaurant gained three Michelin stars within just three years, ‘a feat never seen before in gastronomy.’

“Joël Robuchon welcomed me with great warmth as if I were a member of the family. I was immediately convinced that this man was someone who would mean a lot in my career.”

Robuchon had been awarded the ‘Meilleur Ouvrier de France’ in 1976 (Gobet would also go on to gain the award) but chose not to wear the chef’s jacket with the blue-white-and-red tricolore collar at the time.

“He wore white jackets with great humility … but I learned with Joël what it was like to respect the work, the products, and especially what ‘a job well done’ really means. Joël was very demanding, and not only with others. He couldn't stand imperfection. It was always a challenge in everyday work. But he was always there for [his cooks] to show what could be done in terms of excellence.”

Robuchon also taught his cooks rigor. Gobet sees rigor as a ‘state of mind’ rather than something difficult to achieve. The chef or cuisinier manager must be able to inspire his teams while ensuring the tempo of serving customers in the restaurant, Gobet says. “It's a balance between what you want to put in place and how you can put it in place.”

The desire for excellence

“I learned everything from Joël Robuchon,” Gobet says. “He was very fatherly and I think that, as a good father, you have to know how to tell your children when things are going well but also when things are not going well, and it is not because of the desire for excellence that you can’t speak your mind. We were very close because we were colleagues at work, but we were bound by the same state of mind.”

Robuchon demanded perfection, a ‘précision extrême’, Gobet says, admitting that on many occasions as a young man, he would go home in tears. Not because the work in itself was hard, but because he felt we hadn’t achieved the level of perfection demanded.

Nevertheless, Gobet says, he and his colleagues were proud of their work as they strove for excellence, an excellence Robuchon would never be content in achieving.

“Never stop, even when you think you've reached the end. This is what Joël Robuchon offered us, this gift of teaching us what excellence in humility is all about.”

“Things which are seemingly very simple to make, may be very complex in terms of technique.”

Take for example, Robuchon’s signature dish, the potato purée. Gobet says he and several other cooks spent an afternoon experimenting with 22 different kinds of potatoes to see which potato was best for fries and which was best for purée.

Theories abound about the origin of the crème brûlée, but Gobet is adamant that it was an innovation created chez Robuchon. The master chef, he said, also came up with his tarte au chocolat while working on recipes during weekends.

“’My dear Philippe. I would like you to try this recipe’ which had been written down in detail step by step [to the very millimeter]. It was extraordinary. These are extraordinary memories. And then we tasted [the food], and tasted it again until we achieved excellence.”

“When we were at the point of perfection, it was necessary to keep making changes [to the recipe] because it was [all about] the search for excellence. But once we achieved excellence, we wouldn’t touch the ‘mythical’ recipes such as lobster jelly (la gelée de homard) and caviar with cauliflower cream (caviar à la crème de chou-fleur).”

Gobet traveled extensively overseas with Robuchon, flying some 30 times to Japan and also to Macau to open restaurants.

“We knew sushi bars in Japan and tapas bars in Spain. [Robuchon] brought together Japanese style with Spanish conviviality and added his know-how, his technology [to create] Joël Robuchon's L'Atelier.” The concept with its elements of theatre was “something revolutionary,” Gobet said.

“I was with Joël at the time in Tokyo, at the Ebisu, when he opened this new type of restaurant with chefs wearing black jackets. Why did he decide to have black jackets [instead of the traditional white ones]? Because he wanted the customers to feel like they were at a show: the show on the plate and the show in the kitchen.”

At the age of 51 in 1996, Robuchon suddenly decided to quit the restaurant business to spend more time with his family and pursue other interests.

“He wanted to take time for himself to do other things. So that's how our 13-year collaboration ended and Joël focused on television.”

Gobet stayed on at the restaurant which was taken over by another star chef, Alain Ducasse. However, over the years, he kept in touch with the master chef via regular phone texts and, more recently, Whatsapp.

Robuchon also visited the EHL campus as the ‘parrain’ or patron of the school’s Master Class in Culinary Arts (MCCA) and enjoyed spending time with the students in the program. “He had been really very, very happy to be able to share a moment with all those young people who had just graduated from the MCCA course.”

Gobet recalls the friendship and laughter shared with Robuchon at small, private dinners. “He loved life, he loved sharing. He loved simplicity.”

One of the last meals he had with Robuchon was at a bouchon in Lyon. “We laughed, we drank Beaujolais and we were five to six friends. He really liked conviviality. These were the intimate moments when Joël was in his element.”

Robuchon, he says, was someone who was ‘faithful in friendship.’ He didn’t constantly thank his chefs – Gobet, for one, didn’t expect that – but Robuchon did have his own personal way of encouraging his team members with ‘a little pat on the cheek’.

Despite the tears and the sacrifices, Gobet says working with Robuchon had been a pleasure. Working at this level “requires many sacrifices. But I’ve never felt as though I was making any sort of sacrifice.” (Gobet’s daughters, seeing his Meilleur Ouvrier award, would look him in the eye and tell him, ‘Daddy, that’s your medal for doing a good job.’)