Central & Eastern Europe (CEE) may have, in the past, been perceived as a relatively unstable investment region, especially for the risk averse. However, record hotel investment volumes in the last years have proven otherwise, as investors begin looking to hotel real estate in the region, drawn by the relatively higher returns of hotels and more attractive yields compared to western Europe, which are typically more compressed.

Expectedly, the ongoing COVID-19 pandemic will significantly affect hotel investment activity in the region, as uncertainty continues to grip the world across industries. Nonetheless, the second annual joint publication on hotel investment in CEE by Cushman & Wakefield and international law firm CMS, lends insight into what the region has achieved in recent years. As hotels have begun re-opening and investor activity has been picking up since May, the peak levels reached in 2019 also point towards what the region could hopefully soon achieve in imminent recovery. We summarize the key takeaways of this report.

With EUR1.4bn transacted in 2019 alone, hotel investment volumes in the CEE-6* had reached record levels and was nearly twice the 5-year average from 2015 to 2019. The Czech Republic continued to lead transactions in the region in 2019, accounting for nearly 40% of transaction volume. 2019 was also the year which saw the purchase of the iconic InterContinental Prague for EUR225m by domestic investor R2G, which was, by far, the largest deal in the region.

The CEE-6 saw a strong start to 2020, with approximately EUR297m already transacted across 6 assets by the beginning of the year, primarily in Budapest. Initial expectations for 2020 had thus been optimistic, until the onset of major COVID-19 concerns put many deals on hold. Nonetheless, while the outlook for the year remains somewhat uncertain, signs of recovery are beginning to show, as Cushman & Wakefield reveal that investor activity has begun restarting after expectedly slower periods in March and April.

Growing interest in the region

The attractiveness of CEE had brought a greater diversity of investor types and origin, with more institutional and/or international players displaying increased interest in the region over the last 5 years. Underpinned by several key investment drivers, including healthy market performance and higher yields, competition for deals in the region had been on the rise. In this competitive environment, especially over the last two years, it has been the more nimble private investors, as well as European investors who are closer to the market and able to make superior offers quickly who have prevailed; private investors accounted for a majority (56%) of transaction volume, while European investors (including domestic) took the lion’s share at 84% of total volume in 2019.

“Notwithstanding the current COVID-19 crisis, we have been seeing strong interest from investors in the CEE hotel sector, attracted by healthy yields and long-term capital appreciation potential. This was despite some emerging headwinds such as the rising pipeline in selected markets and growing labour costs. We expect this strong appetite from investors to quickly return once the ongoing pandemic is contained.”

The evolving nature of operating structures

The report also explored the interesting realm of operating structures, which are often more complicated than it seems. Driven by growing investor interest and confidence in the region, hybrid operating models have become more sophisticated and prevalent across CEE. In particular, “sandwich deals” have become increasingly popular, whereby a hotel is leased by a third-party management company, together with a franchise agreement in place with a hotel brand provider such as Marriott or Accor. 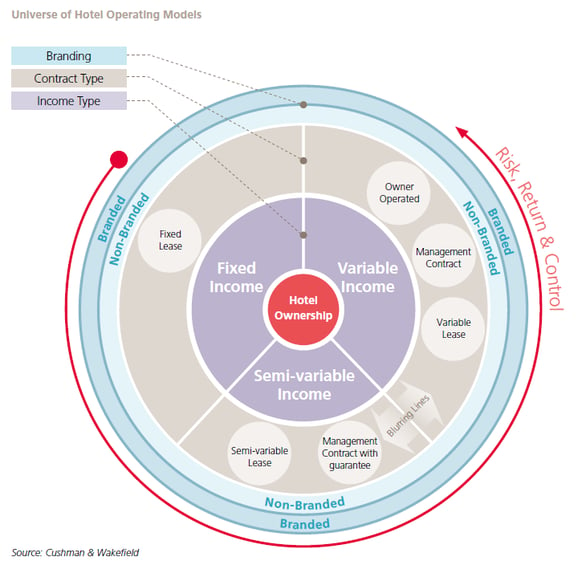 According to Frederic Le Fichoux, Head of Hotel Transactions for Continental Europe at Cushman & Wakefield:

“In recent years, we have experienced increasingly blurring lines among various operating structures, whether it involved leases with variable components or management contracts with income guarantees. The various stakeholders need to get creative to make the deals work, which leads to rising complexity and sophistication, requiring in-depth understanding of the market and extensive experience in this constantly evolving sector. Going forward, this will be even more critical, given the shock caused by the COVID-19 outbreak. There certainly will be more pressure on creating flexible deal structures that can handle the unexpected.”

The current crisis will undoubtedly have a notable impact on the hotel real estate sector in 2020, across regions including CEE. However, the robust investment levels recorded in 2019 have been a testament to the growing popularity and promising potential of the region, which may well be where the CEE-6 is now headed towards on the road to recovery.