The Future of Food: What is it Made Of?

The way food has been produced in the past has led to countless problems . At long last, traditional farming and distribution practices are about to be disrupted. The future of food is high-tech, local and taking into account the needs of our planet. What is the future of food made of, why we cannot continue the way we used to produce and what practices will be replacing current approaches of handling food?

The future of food: new realities for the industry

Currently, there are about 7.7 billion people living on this planet. The UN projects that this number will rise by 2 billion by 2050. What is striking in this context is the fact that developed regions such as Europe and North America will only add about two percent to their current population levels, while the number of people in developing regions such as Sub-Saharan Africa (+99%) and Oceania excluding Australia & New Zealand (+56%) are virtually exploding.

Global wealth is also projected to increase by about 26% with emerging markets accounting for up to one third of that hike. These factors will inevitably lead to a substantial increase in worldwide food consumption.

The current way in which we produce and consume food, however, is in no way able to keep up with that rise in demand.

A report recently published by the WWF and the Global Footprint Network suggests that if every person’s consumption pattern mirrored the EU’s, we would need 2.8 planets to meet global demand.

Traditional approaches to cattle farming alone are contributing more than 14% of human-made greenhouse gas emissions according to the UN Food and Agriculture Organization. Adding to these ill effects is the troubling fact that up to one third of all food produced gets lost or wasted either through inefficiencies in distribution from farms to retailers or simply by careless handling by consumers. Not all hope is lost, however, as innovators around the globe are working on a more responsible and sustainable future for food. Who are the main players and what exactly are they working on to make sure that our plates will be filled for decades to come?

Meat production has long been identified as one of the main factors in human-made climate change. Companies have realized that it is only a question of time until demand for meat or meat-like products from sustainable sources surges. Already back in 2013, the first ever lab-grown burger was sizzling on a grill in London. This was thanks to the result of a research project conducted by a Dutch university and, interestingly, backed by Google Co-Founder, Sergey Brin.

Since then, the technology has come a long way. In October 2019, an Israeli start-up by the telling name of Future Meat Technology (FMT) raised 14 million USD for their pilot manufacturing plant. The company aims to reduce the cost of “growing” meat to as little as 10 USD per pound. This price tag could mean that we might encounter lab-grown meat on supermarket shelves as early as 2022. The fast progress in alternative meat production has sparked the interest of major players in the food industry. Switzerland’s largest retailer Migros, for instance, is among the companies that have turned from spectator to participant through their investment in another Israel-based start-up, Aleph farms. Similar to FMT, Migros estimates a time-frame of about three years until the first lab-grown meat is introduced into the market.

Another approach to reducing the environmental impact of our consumption aims at replacing meat products altogether. Impossible Meat and Beyond Meat are the firms at the forefront of this trend. Thanks to partnerships with restaurant chains such as TGI Friday’s or Burger King in the United States, their plant-based patties containing proteins sourced from peas or soy are surging in popularity.

The reign of these start-ups that set out to disrupt the world of food production is rapidly coming under pressure though as established competitors in the industry are answering to this threat by rolling out meatless options of their own. Swiss giant Nestlé and Tyson, the largest meat manufacturer in the US, are the most prominent among companies that are already supplying retailers with products ranging from plant-based burgers, over meatballs to chicken nuggets. With consumer mindsets changing towards a healthier and more sustainable diet, this trend is likely to continue.

Plant-based foods are not the only alternative protein source that is gaining momentum, however. Countless start-ups are successfully attracting consumers’ interest in their goods made from insects. The size of the global market for insect protein is estimated to reach a volume of 8 billion USD by 2030. In fact, insect-based produce is a promising source of nutrients and could very well be part of the solution for a healthier global diet. About two billion people in more than a hundred countries already regularly eat insects. Furthermore, Michelin-starred chefs such as Roberto Ruiz or Pascal Aussignac are leading the charge in turning insects into a staple ingredient on our plates with their creative menus. It remains to be seen, however, if the doubts that remain in many Western minds related to eating insects can be overcome in the future.

Video: Food of the Future - What Bill Gates and Jeff Bezos are Investing in 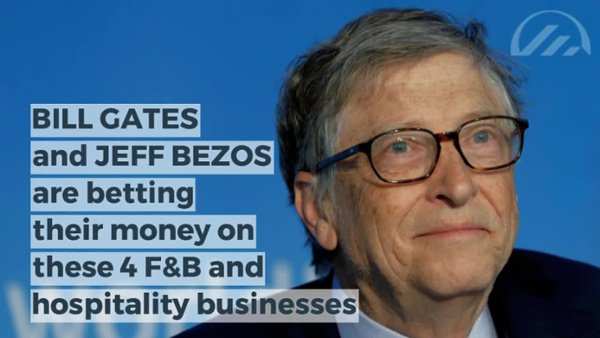 Mono-cultures and plantations in far-off countries that export their goods to consumers thousands of miles away are under a lot of scrutiny as pioneers around the world continue to look for more reasonable ways to feed the population. The goal of innovations in agriculture is to make farming land more productive and produce more food locally where people live, while limiting the use of harmful substances in the process.

Vertical Farming is one such technology looking to create the perfect environment for plants to grow in. The vertically aligned surfaces inside of buildings allow farmers to control all factors like heating, air and water supply as well as humidity that affect a plant’s ability to grow efficiently. Vertical farms can bring food to city centers where most of it is consumed, making shipping by boat, truck or airplane obsolete. The market is booming and is set to grow to almost 13 billion USD globally by 2026 at an annual growth rate of 24%.

Cities are playing an increasingly important part in agriculture also due to another trend – Urban Farming. Roofs, gardens or any other area large enough to grow crops are increasingly being turned into commercial farming land to supply local farmer’s markets, restaurants or other outlets. The farm-to-table approach has been assumed by many well-known figures in the culinary world. It is in no way a fad, but should rather be viewed as a sustained trend towards more efficient food production.

Restaurants, food producers and retailers will all have to cope with far-reaching changes over the coming years. Smart companies have already started answering to customer demands for healthier, local and more responsibly sourced products. With time running out on a potential climate change turnaround, food producers do not only possess the power to positively impact on all of our lives but should also realize the immense financial potential that lies within adapting to the new environment and being ahead of the competition.