Forecasting the Effects of Coronavirus on Switzerland's Hotel and Tourism Industry

A novel coronavirus (formally known as 2019-nCoV) has sprung up over the last few weeks, with its epidemic center in Wuhan, the capital of Hubei province (China). Little is known about this virus, but we do know that has an incubation period of 2 to 14 days and a mortality rate of 2.07%, according to CNN. While urgent research is being carried out, authorities are taking steps to contain the spread of the virus by closing air traffic from China, cancelling package tours to and from the country and placing people in quarantine. These very necessary measures intended to protect people and lives come, however, at a cost.

As far as Switzerland's hospitality and tourism industry are concerned, this is very unfortunate timing. Switzerland has recently become a favored destination of the Chinese. To quantify the phenomenon, it’s worth noting that more than 120 million Chinese tourists annually leave to travel abroad. Most of them go to Asia (Japan, Thailand or Australia), but around 10% are directed to Europe[1]. Among them, a large proportion reach Switzerland. Chinese arrivals in Switzerland numbered 1,026,160 in 2018, making up 5% of all arrivals in Switzerland while the overnight stays spent by Chinese were 1,359,519 (3.5 %).

Figure 1 shows the evolution of inbound tourism from China in the last decades. 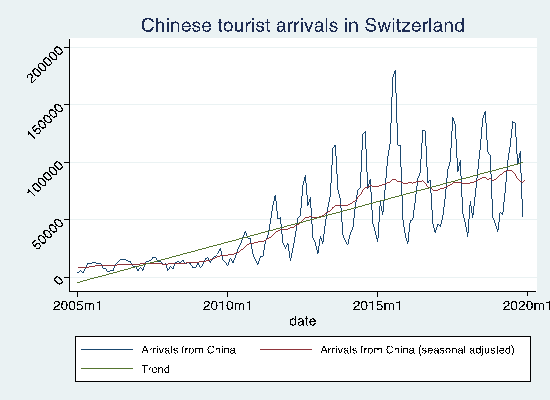 There are certain cantons in Switzerland that are more successful in attracting Chinese tourists. Among the most popular cantons are Lucerne, Bern and Zurich, which recorded 330,566, 283,381 and 160,915 Chinese tourist arrivals respectively in 2018. Similarly, Chinese tourists play different roles in terms of percentage guesses (Figure 2). In fact, Chinese tourists make up around 20% of all international tourists visiting Lucerne and Bern and its stranding areas, while only 2% in other regions such as Ticino. 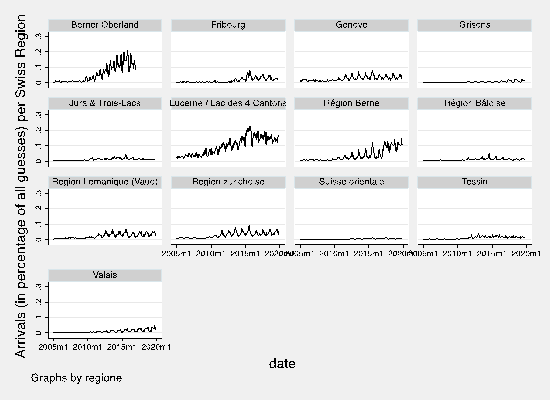 What is known about Chinese tourists and their habits? If we want to draw up an identikit of the typical Chinese tourist traveling in the European continent, s/he might spend a minimum of a week to a maximum of two weeks visiting.

There are two subcategories of Chinese tourists: group travelers and independent travelers. The groups are mainly interested in visiting European metropolises, such as Paris, London and Rome, usually touring the cities by organized coaches. Independent travelers are primarily the so-called millennials, interested in a wide range of travel experiences from sightseeing, shopping and skiing, in the case of Switzerland.

For many Chinese people, traveling means going on the journey of a lifetime. Seeing many of the iconic cities and their attractions is key, as is taking home souvenirs from every destination visited. Except for younger tourists, many Chinese visitors might not be interested in discovering the region’s cuisine and therefore need catering infrastructures that offer their cuisine. For this reason, travel is mainly organized by Chinese tour operators or travel agencies that take care of the entire trip and details.

Chinese travelers come to Switzerland for two main reasons. The first, and obvious one, is that if they plan to move across Europe (e.g. from France to Italy), it is very likely that they will pass by the Swiss Alps. Thus, Switzerland is for them a ‘country between two destinations’. The second is cultural. The Chinese have a real admiration for Switzerland, known to them for its high level of technology, breathtaking panoramas, high standard of living and perhaps the belief that the Swiss are among the happiest people in the world.

The potential impact of coronavirus on Swiss tourism

Following the outbreak of the coronavirus there will inevitably be a shutdown of Chinese tourists and massive cancellations of travel and hotel bookings. How bad is the coronavirus for Switzerland's tourism industry? One may argue that tourism accounts for “only” 3% of the Swiss GDP and that Chinese tourists cover ‘merely’ 3.5% of hotel overnight demand in Switzerland. These figures may delude us into thinking that it is not an alarming situation. On the contrary, it is alarming because of the way Chinese tourist demand is handled in Switzerland.

To begin with, group travel makes up the majority of inbound tourism coming from China, thus, cancellations happen in bulk. From a statistical point of view, the cancellation is not uniformly distributed among Swiss hotels. For some hotels there would be a substantial drop in occupancy rate while for others the impact would be trivial. In financial terms, the problem is known as diversification, which can be resumed with the old adage ‘don't put all your eggs in one basket’. Moreover, when tourists cancel as a group, it’s an ‘all-or-nothing’ situation. Hotels in this scenario cannot simply compensate the loss of some guests with discounted rates. The situation could even get worse given the fact that Chinese tourism is concentrated in specific regions of Switzerland. The hotel industry in Canton Lucerne, for instance, should expect, in the worst-case scenario, a drop of roughly 20% in occupancy rate. This is an alarming news for regions relying heavily on tourism. All in all, the Swiss hospitality industry is very exposed to Chinese tourism demand, not because of the absolute number of Chinese visitors but because of its concentration in some regions and its categorical structure (all-or-nothing).

Furthermore, Chinese tourists’ purchasing power is staggering, calculated at roughly CHF380 per day per person, second only to Middle Eastern tourists. Thus, even if they are “only” 3.5% of the overall tourism demand, they are the most generous 3.5%. In microeconomics terms, the marginal contribution of Chinese tourism is considerable.

Finally, Chinese tourists’ spending is far beyond just on hotel bills. They like buying souvenirs, especially expensive Swiss watches and luxury items. Therefore, the effect is not only related to the hospitality sector but it extends to many other Swiss industries. To recall an old fashion macroeconomics term, there is a multiplier effect that makes their sudden disappearance even worse for the economy as a whole.

In conclusion, the coronavirus exposes the Swiss hospitality and tourism industry to a very particular scenario and reveals an undiversified industry that, like a domino effect, can suffer severe repercussions from the massive cancellations. This may be the application of the very well-known butterfly effect at the heart of chaos theory, namely that we know what has happened but have no idea what consequences it may lead to and how.

There is however a small consolation. Fortunately, this is the period of Chinese New Year, where many Chinese people would rather stay at home and spend time with family and friends. Thus, cancellations might not be so dramatic because reservations in this period are organically low. Hopefully this is not the case of the lesser known ‘Armadillo's Prophecy’: “any optimistic forecast based on subjective and irrational elements passed off as logical and objective, is destined to fuel disappointment, frustration and regrets, over the centuries. Amen.”

Associate Professor of Economics at EHL